ATLANTA - FOX 5 is excited to feature the biggest and best high school football games from around North Georgia this fall. The High 5 Sports Game of the Week has been a staple in our state for 25 years, and this season we've put together a slate of 12 regular-season games that's sure to deliver.

FOX 5 is once again partnering with the Atlanta Falcons to make each game an event like no other. Freddie Falcon and the Falcons Cheerleaders will join us on-site and you might even see a former Dirty Bird player in attendance as well. 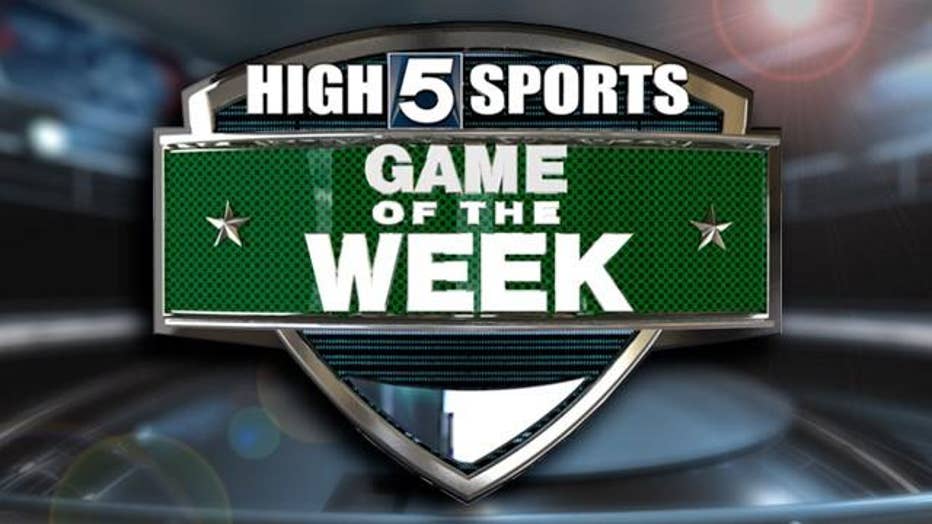 Veteran FOX 5 reporter Bill Hartman, who's been covering high school football in our state for over 50 years and is a member of the Atlanta Sports Hall-of-Fame, will handle the live reports from the stadiums, and our own high school sports savant Cody Chaffins takes the reigns and anchors High 5 Sports every Friday night at 11 o'clock, replacing the legendary Ken Rodriguez who retired in June.

Check out our games, and as always, stay IN YOUR FACE with us throughout the season! 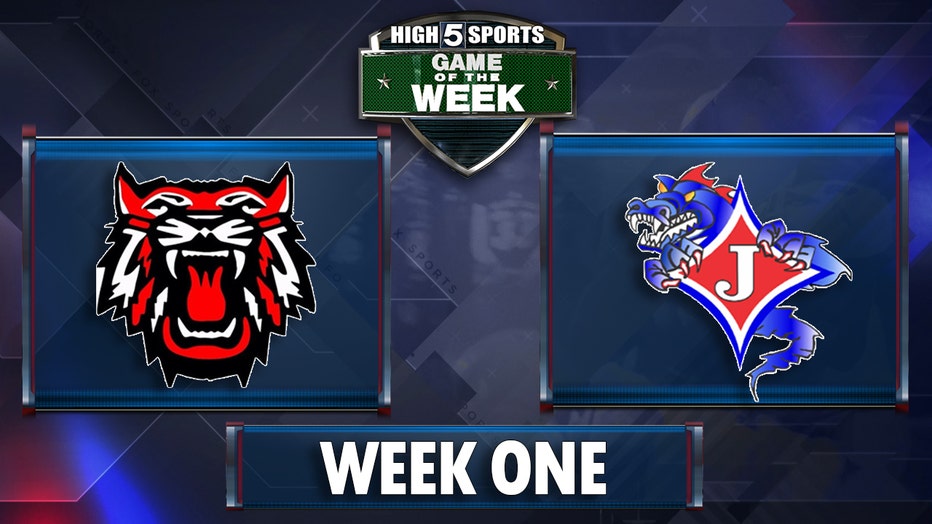 A lengthy lightning delay couldn't stop the Jefferson Dragons from defeating the Rabun County Wildcats 22-13 in our first Game of the Week of 2021. Jefferson’s defense allowed just 13 points to a team that had six all-state players, including UGA quarterback commit Gunner Stockton. Malaki Starks, who will also be attending Georgia next year, scored a touchdown for Jefferson. Sammy Brown ran for over 100 yards to pace the Dragons in his first game with the team. 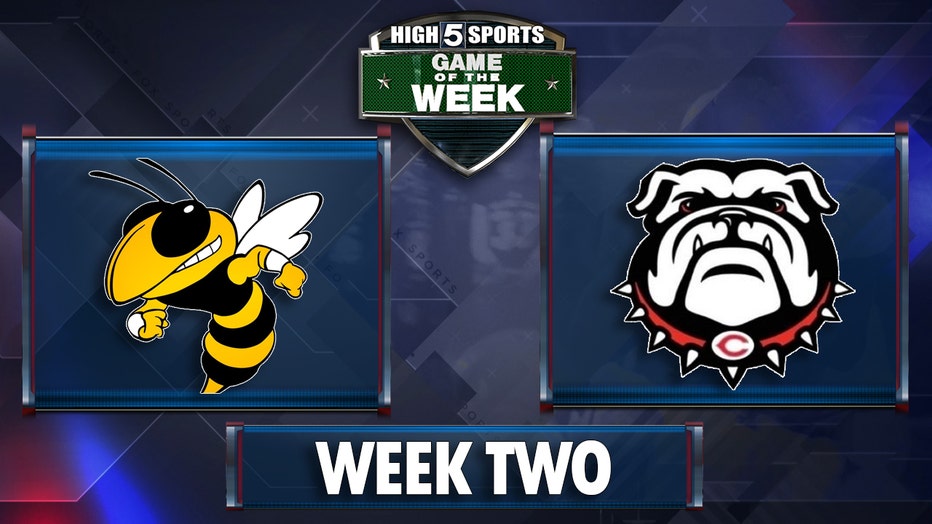 The Rockmart vs. Cedartown rivalry game was postponed due COVID-19 concerns. School officials have not decided if the game will be played at a later date. High 5 Sports went to Twitter to help decide a replacement game and over 3,000 votes were cast in an 18 hour period. Bill Hartman and Super Blaine ended up in Paulding County as the South Paulding Spartans travelled to North Paulding to play the Wolfpack. South had never beaten North and the trend continued as North Paulding beat the Spartans 37-14 after an hour long weather delay. 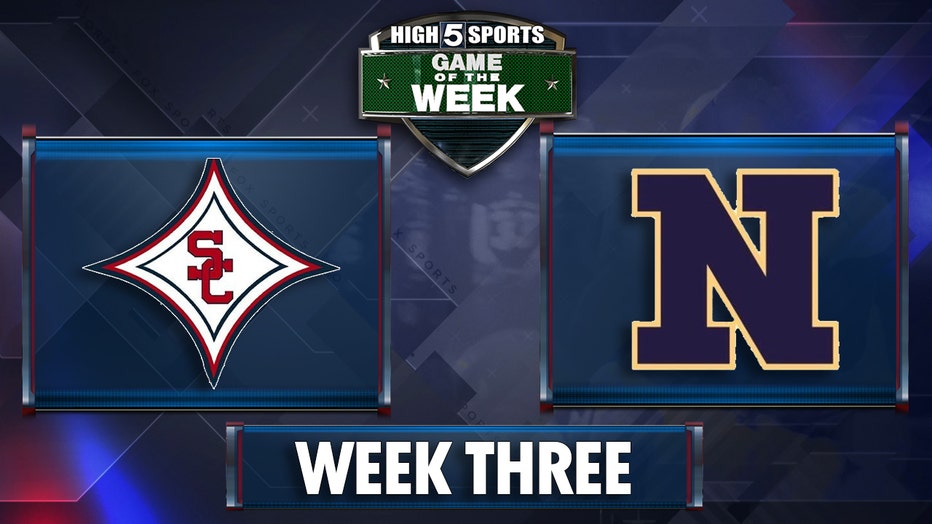 It was a nail-biter, but the Sandy Creek Patriots won a 35-34 thriller over Newnan on the road at Drake Stadium. The Cougars had a two-score lead after quarterback James Paige completed a 72-yard touchdown run to put Newnan up 34-21 with nine minutes remaining in the game. But Sandy Creek came storming back. On fourth-and-goal, Patriots quarterback Geimere Latimer found John Hopson in the end zone to tie the game up. Sandy Creek converted the extra point to seal the win in dramatic fashion. 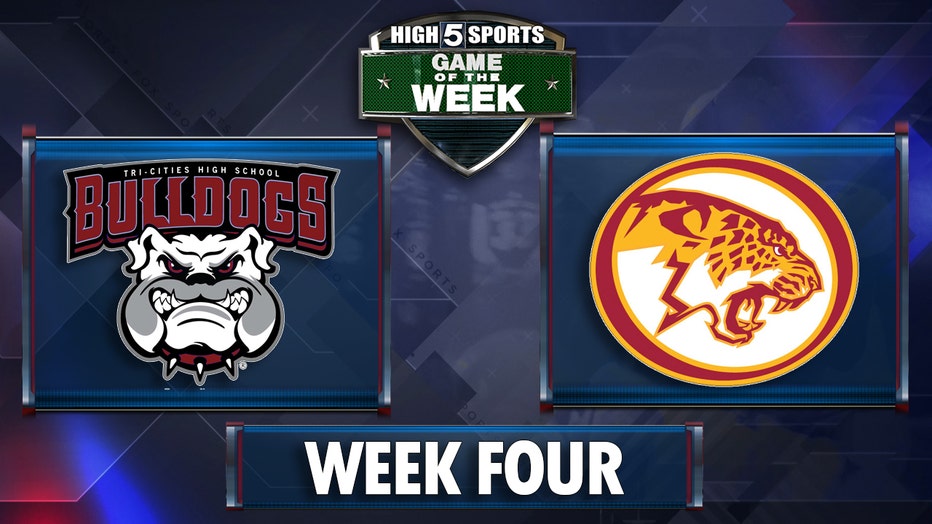 Our APS game from Henderson Stadium saw Maynard Jackson surprise Tri-Cities 28-0 in a battle between East Point and Zone 6 schools. The Jaguars capitalized on a blocked punt and turned it into 6 points when Kenyon Gilliam went 11 yards for the opening score in the first quarter. Gilliam scored again following an interception by Carlos Little and Maynard Jackson took control despite being the underdog coming into the game. The Jaguars has only scored 2 points in their previous games and they ended up scoring four touchdowns on this night. But, it was the defense that paced head coach Eric Williams' team on this perfect weather night in Midtown. Tri-Cities couldn't sustain effective drives for much of the night and failed to put any points on the board. After the game, Gilliam said the win was huge for the Jaguars' confidence. "I really feel like it's a confidence boost", Gilliam said. "Coming off those last two losses we had a good week of practice and we found a way to push through this game." 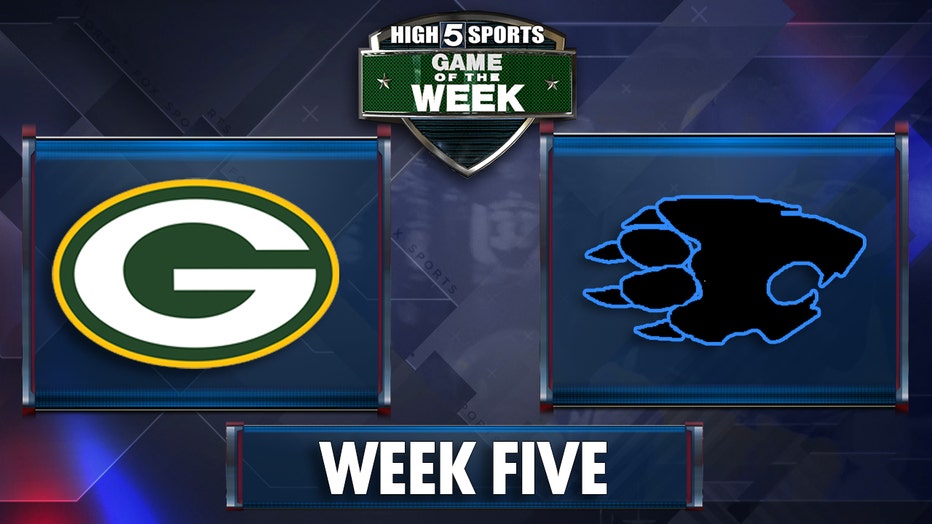 A Classic Southside slugfest! Lovejoy head coach Edgar Carson used to coach the Bears, so this one is personal. Griffin will look to avenge last year’s 27-6 loss to the Wildcats under first-year head coach Rusty Easom, who was the defensive coordinator for the Bears during their 2013 championship season and most recently was the head coach at Rutland High school. 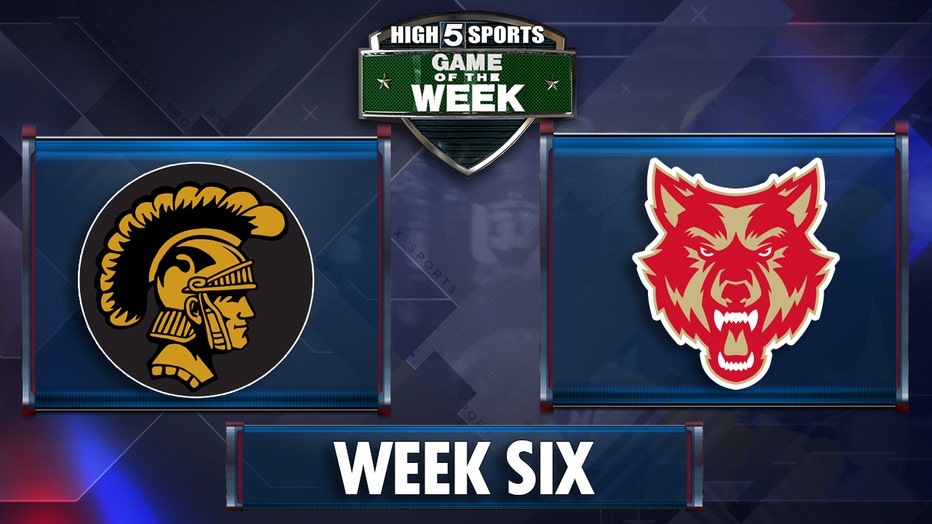 An enormous crowd is expected at Barron Stadium as former Cartersville head coach Joey King, who won two state championships with Trevor Lawrence, takes the new-look Trojans on the road to face John Reid’s two-time state champion Wolves. FOX 5 Sports high school football analyst Rusty Mansell says this one will be worth the price of admission, so get your tickets early and watch the highlights on High 5 Sports at 11! 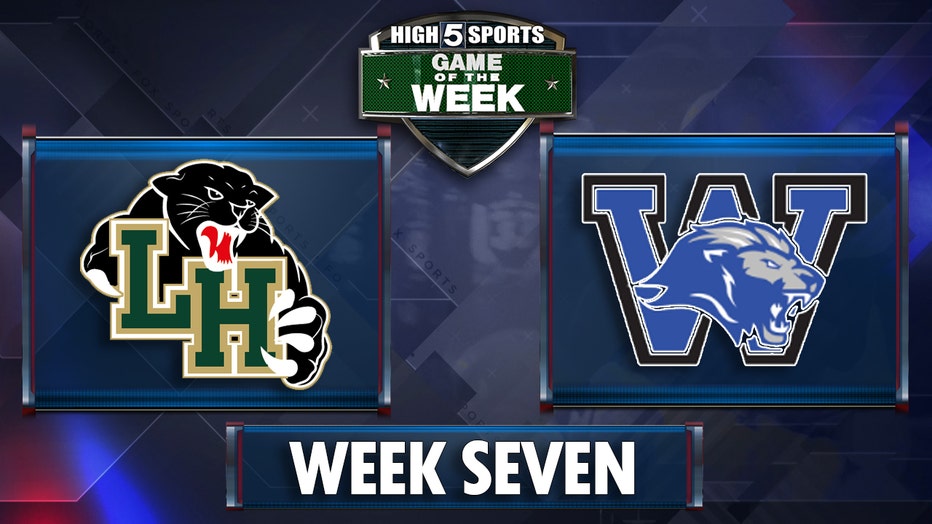 Talent, talent, and more talent- plus a chippy rivalry- makes this one special. Westlake’s head coach Bobby May took the Lions to the state finals in only his second season, losing to Lee County 35-14. Meanwhile, Hughes finished 11-2 after making it to the state quarter-finals. A week five loss to Westlake in 2020 left a nasty taste in their mouths, so coach Daniel "Boone" Williams will have his Panthers ready. 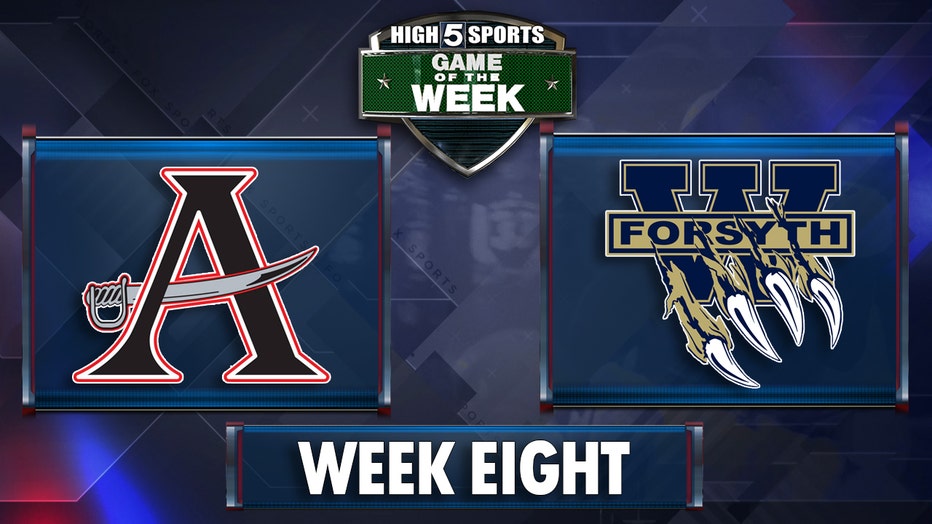 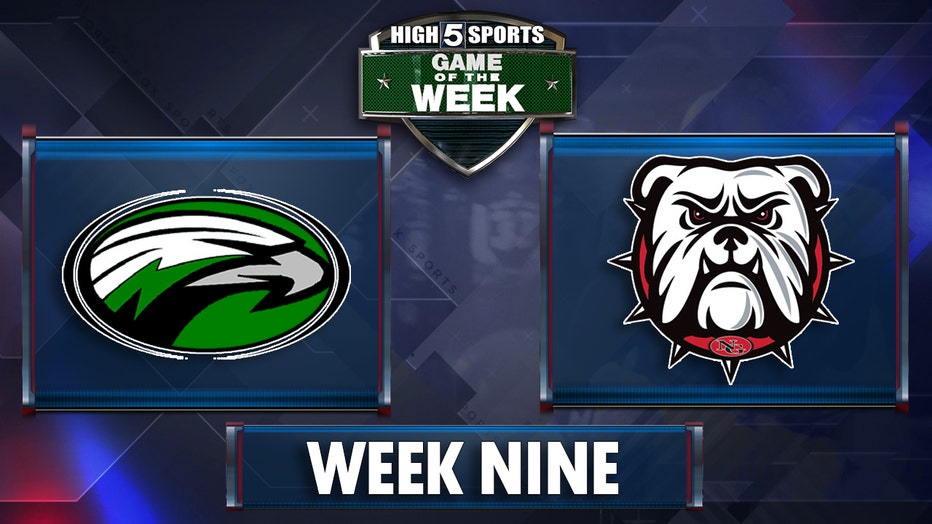 Two teams with championship aspirations square off in this Region 8-7A clash. Collins Hill is coming off its first-ever state final appearance against Grayson, while Bill Stewart’s Bulldogs hope to go deeper than the second round of the playoffs and recapture that 2017 state championship vibe. 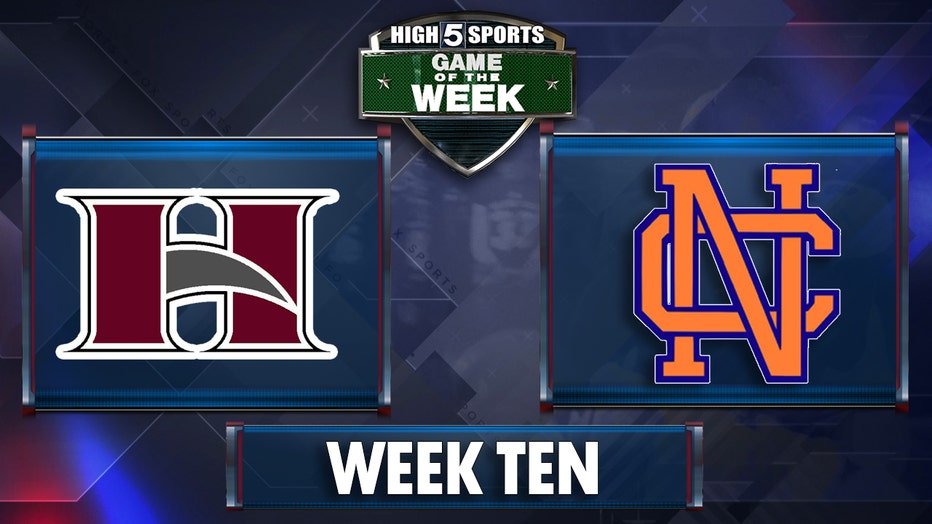 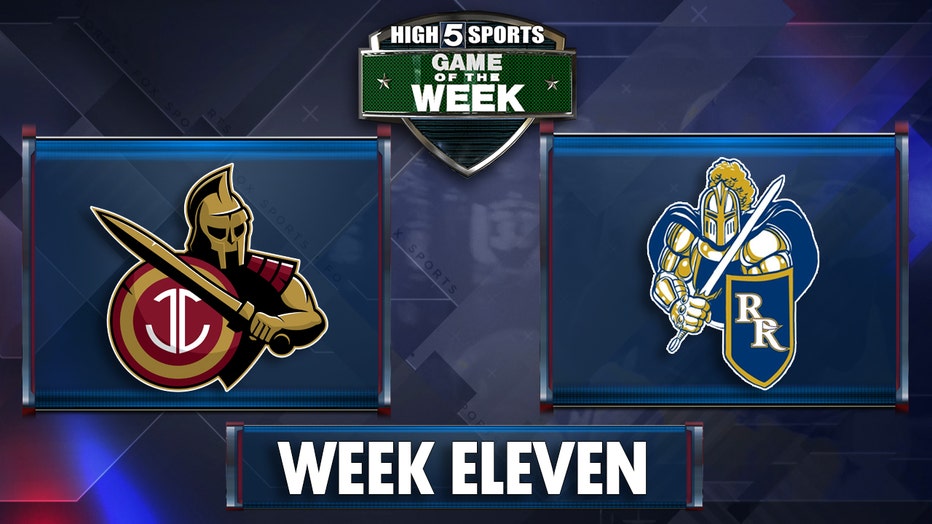 This game will likely have region implications and features one of state’s best running backs in the Raiders’ Amhere Morrison. River Ridge won its first ever region title and took a 11-0 record into week three of the GHSA playoffs before losing to powerhouse Lee County, while the Gladiators hope to bounce back from a 4-5 season under fifth year head coach Matt Helmerich. 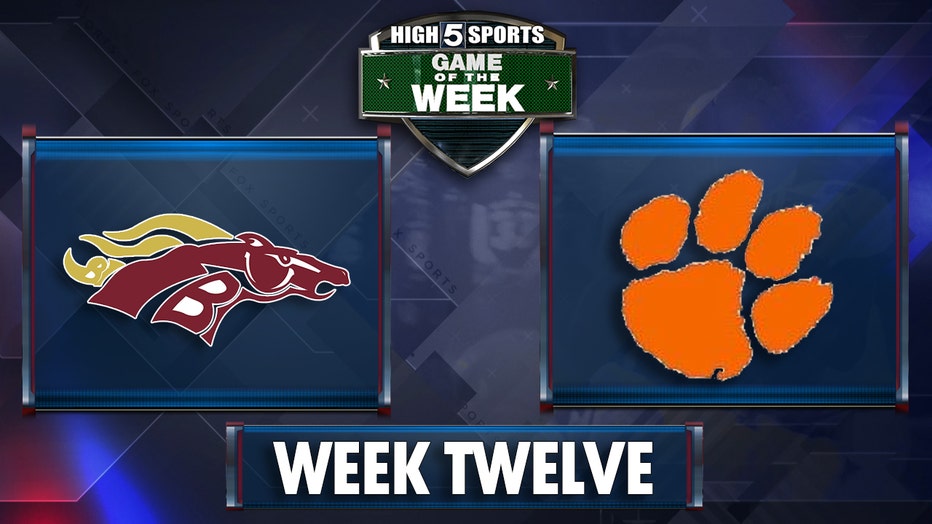 The Broncos lost several key players to transfer, but both teams should play themselves into form in time for one of state’s biggest rivalry games which almost always has playoff implications. The Atlanta Falcons will join FOX 5 one final time to celebrate this Gwinnett County classic from one of the country’s most iconic stadiums, Parkview’s Big Orange Jungle.

Catch High 5 Sports each Friday at 11 p.m. during football streaming right here or by clicking here.