ATLANTA - For the last 64 years, native Atlantans, families, politicians, media types, artists, sports fans, and folks from just about every other walk off like have enjoyed good food, good drink, and good company at one of the city’s favorite longtime watering holes, Manuel’s Tavern.  Manuel’s was founded by former prominent local politician Manuel Maloof and to this day remains owned and operated by the Maloof family.

Despite decades of success and prominence, even this Atlanta institution was not immune from the impacts of the COVID-19 pandemic and for owner Brain Maloof, the situation and the future of the historic tavern looked dire.

But that’s when the community stepped in starting a Go Fund Me page to Save Manuel’s Tavern.

The initial goal was to raise $75,000 to help meet expenses, pay for required licences, compensate employees, and purchase food, but the response has been incredible. To date, the page has raised more than $178,000 and counting, a response that Brain Maloof describes as “humbling”.

This week, #BurgersWithBuck decided it was high time that we pay a visit to Manuel’s Tavern for a popular burger that we have enjoyed on many occasions personally, but this would be the first time professionally. 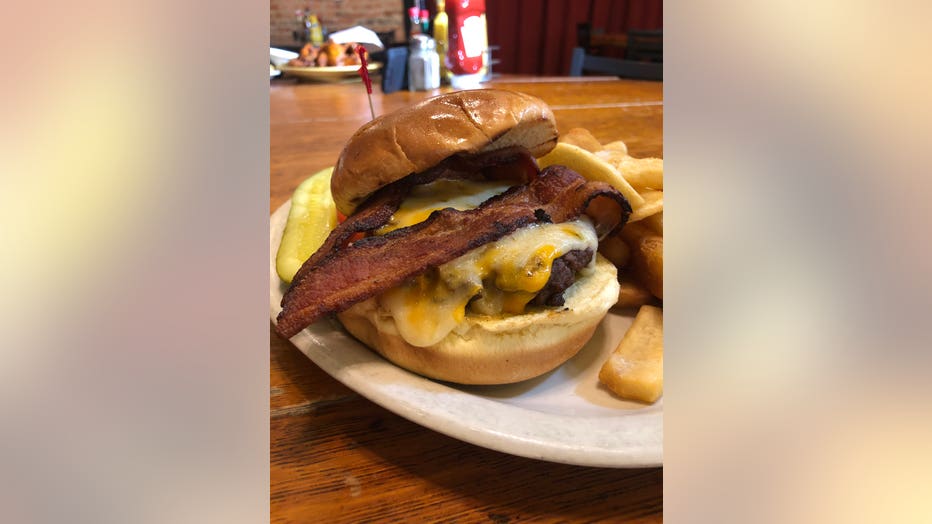 The McCloskey Burger is named for longtime Manuel’s Tavern employee, the late Bill McCloskey. While Bill was a big fan of the Manuel’s Burger on the menu, he liked to customize his by adding just a little more meat to make it just a little bit bigger. He was a man after my own heart. Well, as you might imagine, the bigger, better McCloskey Cheese Burger caught on, Bill and his legacy continue to live on the menu at Manuel’s.

The McCloskey Cheese Burger is pretty basic, and that’s one of the reasons it’s a classic. As previously stated, it starts with a pattie that’s just a little bit bigger than its predecessor, and is served on a knot bun. It is topped with American cheese, lettuce, tomato, and onion. That’s it. But we opted to add thick cut bacon, which #BWB highly recommends.

For more information about Manuel’s Tavern including the location, menu, and hours of operation, go to their website, https://manuelstavern.com/. Also, if you would like to contribute, the following link will take you to the ‘Save Manuel’s Tavern’ Go Fund Me page, https://www.gofundme.com/f/save-manuels-tavern. And, as always, if you have a favorite burger that you would like to see featured on Good Day Atlanta, tell me about it on https://www.facebook.com/BuckFOX5 or https://twitter.com/BuckFOX5, and don’t forget to use the hash tag #BurgersWithBuck and/or #BWB.