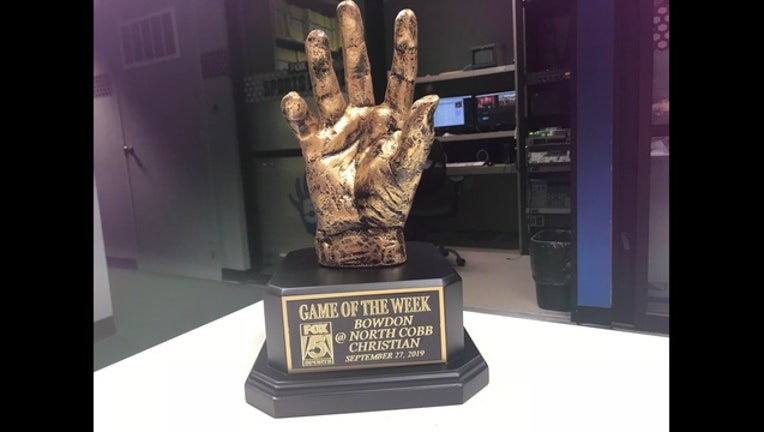 The week six High 5 Sports Game of the Week features two ranked teams battling for early-season supremacy in 6-A (Div A). Bowdon (3-0) and North Cobb Christian (4-0) face off in a region mixed with public and private schools, which makes it particularly challenging if you ask Bowdon head coach Rich Fendley.

Game of the Week – Pre-game rally

According to Fendley, one of the reasons for the discrepancy is the private schools' ability to find key skill players when they need them.

"If they lose a receiver, they have the freedom to go get an older, well-polished kid who can play; whereas, we've gotta hope we've got one in the program, so I think that's a definite advantage in Single-A football," Fendley said. "If you can go get three or four of the right kids you've got a chance to be pretty good. You take North Cobb Christian, they lost their quarterback from a year ago and I kind of figured they were gonna be down this year, but a private school can go out and get another kid who might be a junior or a senior,  and they've got a kid who's a senior who came in there and filled those shoes. They can go get what they need...us...we had a quarterback that came in who is a ninth-grader."

North Cobb Christian Principal Megan Strange disputes Fendley's assertion that the Eagles simply replaced their quarterback with a player from outside the school. Strange told High 5 Sports that Anson Mathis actually joined  NCCS as a 7th grader and has been in their football program since his enrollment. According to Strange, Mathis played a lot at quarterback as a freshman and sophomore and played wide receiver and some quarterback as a junior. Anson's twin brother Austin is a lineman on the team and their brother Robert graduated from NCCS two years ago.

North Cobb Christian head Coach Mark Hollars speaks ahead of this week's Game of the Week.

Red Devil's quarterback Robert McNeal grew up in the Bowdon feeder system. McNeal is just fourteen years old and has become the driving force behind the Red Devils 3-0 start. McNeal is putting up big numbers after winning two middle school championships in the Bowdon system.

"He's going to be very, very special," said Fendley. "If you count our scrimmages he's 5-0. We're fortunate that he's got all five starting offensive linemen from last season in front of him...so he's got some pieces around him."

Fendley has been reminding his team all week about last year's hard-fought loss to the Eagles on Bowdon's home field. North Cobb Christian came into that game undefeated and Bowdon was winless, but the Red Devils appeared to have won the game with a defensive stop at the end of the fourth quarter, but the play was called back for interference. The Eagles then scored a game-winning touchdown to beat Bowdon 19-15 on the game's final play. After that game, North Cobb Christian went on to make the playoffs, while the Red Devils finished the season 1-9.

"We kind of look at this game as a measuring stick for us," Fendley told High 5 Sports. "All of our kids remember that last game. We've got that in the back of our minds, and we've kind of reminded our kids of that as we've prepared for the last three weeks."

Bowdon is coming off an unusual two-week break, they haven't played a game since September 6. North Cobb Christian is on Fall break this week, so both teams might have to shake off the rust when the game kicks off at 7:30 at Jacob Dennis Field in Kennesaw.

The Eagles shut out 7th-ranked Trion last week and appear to be using their triple-option attack successfully, outscoring opponents 100-35 after four games.

Bowdon vs. North Cobb Christian – Game of the Week

Bill Hartman and Super Blaine were in Kennesaw for Bowdon versus North Cobb Christian playing for the Golden Hand Trophy.