You only have to talk to Falcons’ sixth-round pick Frank Darby for a few seconds to realize that he radiates a special energy — over Zoom no less.

The Arizona State wide receiver says he’s always been this effervescent — but that it only intensified after he lost his mom, and inherited her energy, in February.

"She done left another battery in me now," he told FOX 5 Sports. "So my energy battery plus (hers)? Oh man, call me Duracell!"

You only have to talk to Falcons’ sixth-round pick Frank Darby for a few seconds to realize that he radiates a special energy — over Zoom no less. The Arizona State wide receiver says he’s always been this effervescent — but that it only intensified after he lost his mom, and inherited her energy, in February.

He’d just had one of his best days of training for the NFL Draft in Miami when Darby’s sister rang with the news that his mother, LaDorne Gurley, had died of a heart attack.

"That’s one thing I would say is it was tough for me because it was unexpected," Darby recalled. "Right now and when it happened, I felt like I needed just taking one day at a time, and just remember that this was what she would want for me. Like I was explaining to you how happy she’d be when she’d call me so this is what she would want for me. So you can't beat yourself up and go backwards when you were starting to become successful. So, it was tough."

And after spending time at home in Jersey City, N.J., after his mother’s passing, he had to work double-time when he returned to training — gaining weight, speed, and strength back.

Darby's energy hadn’t gone anywhere. But it was missed by his training partners.

"When I went back to Miami, they just brought me up," he said. "They wasn't going to keep saying, you know, ‘my condolences,’ and stuff like that; they just try to get my mind off it really, just make me train better, like ‘Frank, do this, do that, do that, you know, let's do this, do that,’ and then also the players I was also working out with there, they was like, ‘Frank we need you,’ like that's why I was saying before like my energy and the person I am and reflect others, you know, it was like ‘Frank, turn us up right now!’"

Darby said even when he suffered a rib injury at Arizona State in November, he could not just relax on the sideline and not hype up his teammates.

"I like to see everybody around me be great, and if my energy and the way I can make another person on my team, my other teammates better? Then that's what I got to do," he said. "I just feel like this is what I have to be. I have to be like this because it affects the people around me so they could be great, because that's just how we got to be, like we all need to be great."

"I'm getting real messages from Kyle Pitts, Julio, and you know they were all saying, ‘What's up boy, let's get ready to work.’ I'm just like, 'Ohh, I’m real, I’m one of them,' you know?" he said. "So it's actually now as I go through like the days, it's just like, ‘Wow, you really beat the odds, Frank, you know, you doing the impossible.’"

And by impossible, he means making it out of his hometown, where he played sports year-round — from football straight into basketball and then volleyball, before summer football camp started all over again — to keep him away from bad influences that he said he saw bring down others in Jersey City.

"So most of my time, most of my time I spent just playing sports you know, I wasn't trying to go out and hang out on the blocks where most of my other friends was going to do," he recalled. "They’d be like, ‘Frank come hang out with us.’ ‘Nah, I gotta go home, my mother waiting for me.’"

His mom, a home health aide who went to work before Darby went to school and was often asleep when he got home from practice, would leave him messages after reading about her son in the newspaper.

"I just didn't want to do the negative stuff, like I seen a lot of people throw their lives away doing that stuff over just one silly decision, and I'm just like I can't, you know, I was just one thing about me and my mindset was just like I can't," Darby said. "I have to make my mother proud, I have to make my mother happy, and this is how I make her happy, just playing sports. Each and every morning I'd just get that phone call from her coming off work, just because she was out in the morning, she couldn’t say nothing to me because she was out, so I’d get a phone call, while I'm in class, and she just called me like, 'I'm proud of you. I saw you in the Jersey Journal. I’m so proud of you baby. Keep going.'" 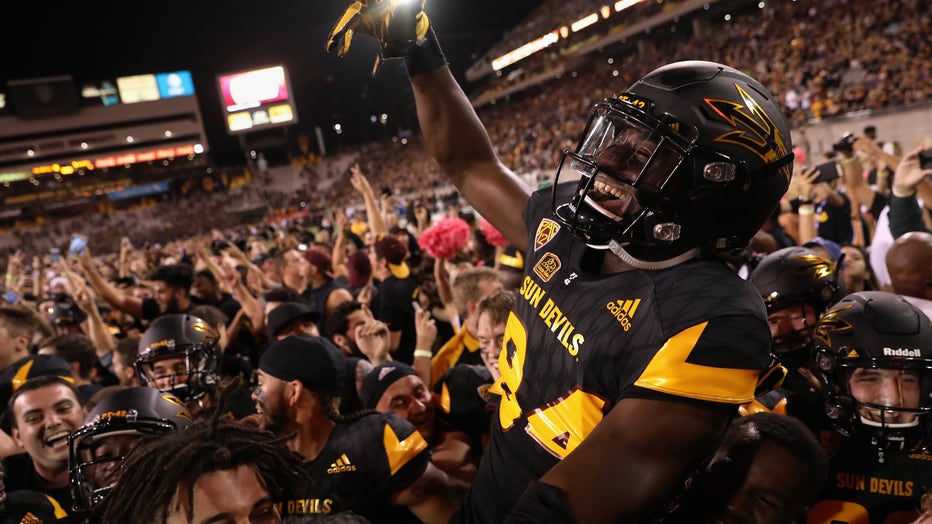 TEMPE, AZ - OCTOBER 14: Wide receiver Frank Darby #84 of the Arizona State Sun Devils celebrates with teammates on the field after defeating the Washington Huskies in the college football game at Sun Devil Stadium on October 14, 2017 in Tempe, Arizon

Taking his talents to Tempe as a three-star recruit, Darby played in 40 games in four seasons, accumulating 1,317 yards and 13 touchdowns on 67 catches. A shortened 2020 season in the Pac-12 combined with a rib injury in November translated to Darby playing just three games last season, but he can’t contain his excitement to contribute in Atlanta, where special teams may be in his early future. He said he really connected with the Falcons coaching staff he communicated within the lead-up to the NFL Draft.

Wherever the Falcons need him, his energy boost will be big enough for two.

"I just wish my mom was here, you know?" he said. "She would be happy right now, hugging me probably around my neck like this, just keep kissing my face, just like, 'I'm proud of you,' but I know she's looking down on me right now, and I'm gonna keep going because I feel like I got more for her."