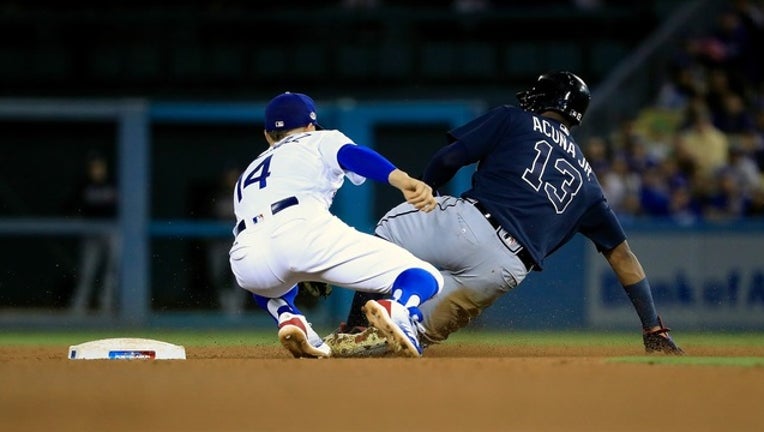 Ronald Acuna Jr. of the Braves is caught stealing by Enrique Hernandez of the Dodgers during Game One of the National League Division Series at Dodger Stadium on October 4, 2018. (Photo by Sean M. Haffey/Getty Images)

Picked a surprising Game 1 starter over fellow lefty Clayton Kershaw, Ryu delivered in his first postseason start since 2014. The South Korean allowed four singles - all with two outs - struck out eight and walked none.

The 31-year-old Ryu missed 3 1/2 months of the season with a groin strain and returned Aug. 15 to post a 1.88 ERA in 52 2/3 innings. Dodgers great Sandy Koufax was among those who gave Ryu a standing ovation as he walked to the dugout after his final pitch.

The Dodgers set franchise and National League records by hitting 235 homers during the regular season, and their tear continued with three more to begin their playoffs. The defending NL champions actually were outhit 6-5 by Atlanta, but the Braves only got singles.

Game 2 in the best-of-five matchup is Friday at Dodger Stadium, with Kershaw starting for Los Angeles against Anibal Sanchez.

The Braves have lost eight straight series openers in the postseason. They haven't won a Game 1 since 2001 when they went on to sweep Houston in the NLDS.

Rookie Ronald Acuna Jr. struck out twice and went 0 for 4 as the Baby Braves were blanked. This was Atlanta's first playoff appearance since 2013, when they lost to the Dodgers in four games.

Joc Pederson's leading shot in the bottom of the first rattled Mike Foltynewicz in his postseason debut.

Foltynewicz gave up four runs and three hits in two innings. The right-hander struck out five and walked two. He got out of a two-out, bases-loaded jam in the first by striking out Yasiel Puig.

With two outs, he hit Pederson and walked Justin Turner before Muncy sent a 1-0 pitch over the wall in center, making it 4-0.

Enrique Hernandez hit a solo shot with two outs in the sixth off Brad Brach. Pinch-hitter David Freese added a sacrifice fly in the eighth.

Ryu allowed a two-out single to Freddie Freeman in the first.

After that, he retired 12 consecutive batters before a pair of two-out singles to Ender Inciarte and former Dodger Charlie Culberson in the fifth. Puig charged in on pinch-hitter Kurt Suzuki's fly to right field to end the inning. The Braves didn't advance a runner past second base in the game.

Ryu gave up another two-out single to Ozzie Albies in the seventh. With fans on their feet waving blue towels and the crowd of 50,947 chanting his name, Ryu got Inciarte on a swinging strikeout to end the inning.