Julio Jones is officially no longer a Falcon.

The Falcons confirmed Sunday afternoon they are trading the perennial All-Pro wide receiver to Tennessee.

The 32-year-old receiver reportedly requested a trade earlier this year, but the Falcons' new regime had maintained it was pursuing options to trade Jones due to the team's salary cap woes.

General manager Terry Fontenot told FOX 5 Sports that he had been fielding calls about Jones prior to the NFL Draft in April. Team leadership consistently said publicly that any trade involving Jones would be due to the salary cap difficulties the franchise faced, not Jones' own wishes to be traded.

"That's one of those things when you're doing things the right way in an organization, you have to listen if people call, on any player," Fontenot told FOX 5 in April. "Especially, we are in a difficult cap situation, that's just the circumstance and it's not a surprise for us. We knew the circumstance we were in. Our administration has done an excellent job up to this point getting us in a position to be able to manage the cap, and yet we still have more work to do. So when teams call about any players then we have to listen and we have to weigh it and we have to determine what's best for the organization and we have to handle everything with class."

On Fox Sports 1's "Undisputed" back in May, Jones was asked about his future with the Falcons, to which he replied, "I'm outta there."

The Titans are the defending AFC South champions and just one season removed from a conference title game appearance. 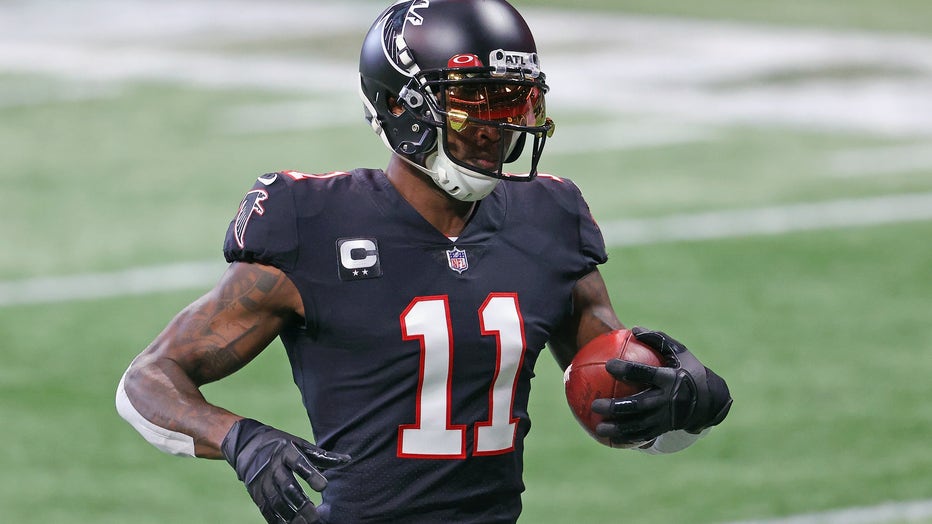 ATLANTA, GEORGIA - DECEMBER 06: Julio Jones #11 of the Atlanta Falcons warms-up prior to the game against the New Orleans Saints at Mercedes-Benz Stadium on December 06, 2020 in Atlanta, Georgia. (Photo by Kevin C. Cox/Getty Images)

Jones was originally selected by the Falcons in the first round at No. 6 overall in the 2011 NFL Draft. In 10 seasons in Atlanta, Jones played in 135 games catching 848 passes for 12,896 yards and 60 touchdowns.

A seven-time Pro Bowl selection, two time All-Pro and a member of the NFL’s all-decade team for the 2010s, Jones leaves the Falcons as the club's all-time leader in receptions, receiving yards and 100-yard games (57). He also owns team records for single-season receptions (136) and receiving yards (1,871) as well as the single-game record for receiving yards (300).