ATLANTA - The Falcons announced Wednesday that Sunday’s home game against the Detroit Lions would be its “Rise Up and Vote” game, highlighting the franchise’s push to register and educate Georgia voters ahead of the November election.

Team officials said this game was chosen because it’s the last Falcons home game before early voting ends on Oct. 30.

As part of the initiative, the Falcons will debut their new alternate gradient uniform. This year, the new look took on additional meaning as the Falcons organization said, along with the player-led social justice committee, they saw this game as a moment to shine a spotlight on the importance of fans exercising their voice and democratic right to vote.

In addition to the gradient uniform debut, the 11 Falcons on the players' social justice committee will wear special cleats, designed by two women on the team's design team, during warm-ups that feature the gradient design and "Rise Up and Vote" messaging.

Additionally, the Lions and Falcons players have collaborated to name the late Reverend Martin Luther King Jr., the legendary civil rights leader from Atlanta, honorary captain of the game. The Falcons have chosen iconic Atlantans in the social justice and civil rights movements as honorary captains all season long. 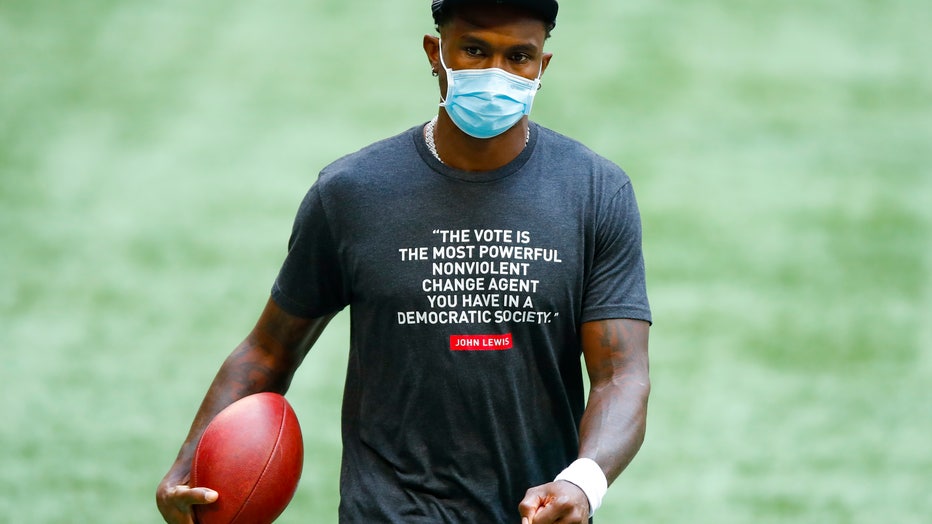 ATLANTA, GA - SEPTEMBER 27: Julio Jones #11 of the Atlanta Falcons watches on while wearing a shirt quoting John Lewis on voting prior to an NFL game against the Chicago Bears at Mercedes-Benz Stadium on September 27, 2020 in Atlanta, Georgia. (Photo

"We have honored John Lewis and a few others, and this week we’re going to honor Martin Luther King, Jr. And I thought it was really awesome that the team chose to do that on their own," Morgan Shaw Parker, vice president and chief marketing officer for AMB Sports + Entertainment, said. "What’s really interesting is that Martin Luther King’s ‘I Have A Dream’ speech, the original one that he did, was actually given in Detroit. So it’s really a special moment for both teams to come together and honor him this week."

The players said it was critical to get the entire team to contribute to this effort, from the top down.

“It was cool that Mr. Blank was one of the first owners that came out and actually backed us. He actually gave us dollar for dollar with all the donations that our team was doing, with all the resources and all the backing that we need,” safety Ricardo Allen said. “It was cool because Mr. Blank was one of the people who was pushing us to do it. For us to know that our career wasn’t on the line, we were able to do the impact of the communities and spread all the resources and dollars that we could to the community. That was much easier than having to fight against the people who are writing your checks.”

This game initiative was sparked by both Detroit and Atlanta, and their teams' pushes to register and educate voters in their cities and states.

"I love that teams are actually putting down their rivalry for the sole purpose of bringing communities together around something that is frankly bigger than football, and that’s the democratic right to vote," Parker said. "Matt Stafford and Matt Ryan are friends off the field, both of them have ties to Atlanta, and both of them have given over a million dollars to the social justice causes. Voting has been something teams have leaned into very heavily this year, and so it was only natural that they want to come together and talk about it before this game, especially given that it’s a week before the election at a really important time that they want to make sure that fans in both cities are actually getting out to vote or turning in their ballots early."