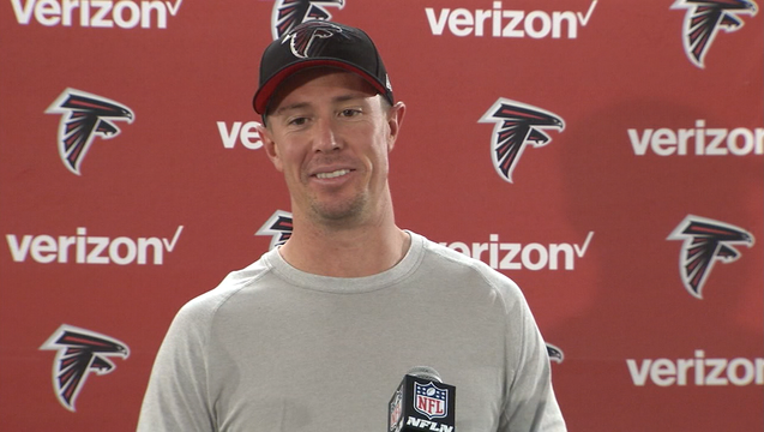 BOSTON (AP) - The enemies list is long in New England, and it grows with each tweet that dares to doubt Tom Brady's supremacy or call coach Bill Belichick a cheater.

But there's one opponent who has escaped the fury of the Foxborough fans, and even has a considerable amount of goodwill in the heart of New England. In fact, it's hard to find any kind of animosity toward Atlanta Falcons quarterback Matt Ryan, who built his reputation - personally and professionally - at Boston College.

"It's hard to think of anything bad to say about Matt," said former BC sports information director Chris Cameron, who was in the athletic department when Ryan led the Eagles to a No. 2 ranking in The Associated Press poll in the middle of the 2007 season.

"I think there are many people at Boston College who are die-hard Patriots fans who are somewhat torn. But I can't think of anyone who will wish any ill will on Matt Ryan."

Peyton Manning is persona non grata in New England because he had the nerve to win a couple of Super Bowls. His original team, the Indianapolis Colts, earned the Patriots' ire for questioning whether the team's footballs were properly inflated in a 2015 playoff game.

The Baltimore Ravens and New York Jets were also sucked into the two-year "Deflategate" scandal, drawing the wrath of the local fans. And don't get the Foxborough Bros started on commissioner Roger Goodell, or on ESPN.

But Ryan is the rare New England opponent who doesn't inspire hatred in the area, even as he prepares to face the Patriots in the Super Bowl on Sunday.

At Boston College, a guard shack displays a poster of "Matty Ice," the nickname Ryan picked up from his Eagles teammates for his ability to remain cool under pressure. In the athletic building, a case is filled with life-sized action shots of Ryan and some of the trophies he won : Johnny Unitas Award, Manning Award, Atlantic Coast Conference Player of the Year.

Around campus in the run-up to the Super Bowl, they're telling stories about the humble but talented quarterback who was also a conscientious student and friend.

"He remembers people's names. He's polite to them. There's really no ego there that I've detected, but there's confidence," Cameron said. "He's just a really nice, caring guy. He's just got that 'It' factor."

A Philadelphia native who was under-recruited coming out of high school as an option quarterback who also played baseball and basketball, Ryan led Boston College to that No. 2 ranking and finished in the top 10 in Heisman Trophy voting. BC finished 11-3 and No. 10 in the nation, beating Michigan State in the Champs Sports Bowl.

But when the Falcons took Ryan third overall in the 2008 NFL draft, Cameron found himself spending hours online responding to comments on an Atlanta newspaper website from fans who were disappointed with the pick.

Despite growing up in Kentucky - a Bengals fan "I guess," he said - Cameron became a Patriots fan after living in the Boston area for more than a decade, but also maintained an allegiance to former BC Eagles in the NFL. (BC linebacker Luke Kuechly played in the Super Bowl last year for the Carolina Panthers.)

Asked about the mixed loyalties in his former stomping grounds, Ryan said in Atlanta last week, "None of my friends have mixed loyalties," emphasizing the word "my" and drawing a laugh from the assembled reporters.

Count Cameron among them.

"I am a Patriots fan, and I'm rooting for the Falcons. Solely because of Matt," he said. "On a very personal level, to see someone that good of a person succeed at that level would be incredible."