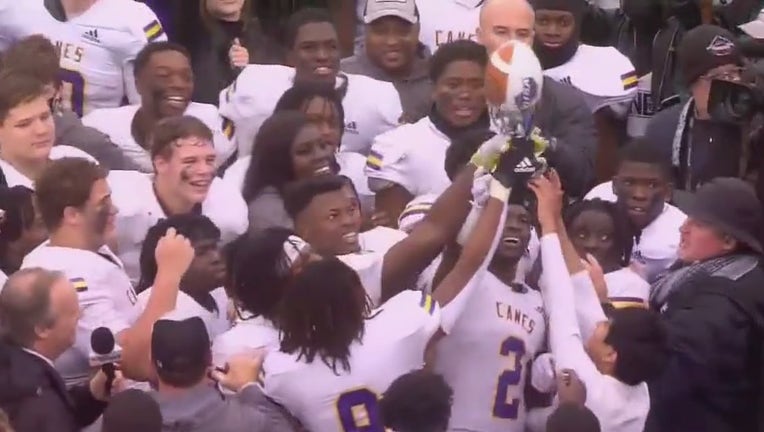 ATLANTA - The 2021 Georgia High School Association football championship games are finished, and so is the high school football season.

Eight games spread out of three days were affected by some chilly temperatures and dampness, but the sparks still flew between the state's top football teams at Georgia State University's Center Parc Stadium.

Here's a recap of the season's final week of HIGH 5 Sports action:

Dodge County won a thrilling game in the second overtime on a 7-yard touchdown run.

The game was scoreless until Dodge County's game-winning touchdown in a 6-0 win.

Hillgrove felt like there was unfinished business heading into the state championship game. They won a back-and-forth contest with Marietta.

Hillgrove was making its second consecutive appearance in the flag football state finals.

Brooks County lost to Irwin County in September earlier this season, but the Trojans left Atlanta with a trophy on Thursday night.

Class 2A Championship: Fitzgerald vs. Thomasville

The Fitzgerald Purple Hurricanes were going for their first title since 1948.

Fitzgerald has appeared in several state title games, but the school's last championship was in 1948.

Only a few scores separated to two teams with Fitzgerald winning 21-7.

Class 4A: Carver Columbus vs. Benedictine

The Benedictine Cadets broke a 14-14 tie in the third quarter. They headed back home with a state championship.

Perennial powerhouse Benedictine broke a 14-14 stalemate in the third quarter and went on to roll to a state title.

Class 6A: Langston Hughes vs. Buford

The second day of GHSA Football Championships continued Friday. The game came down to a last-second field goal.

Buford and Langston Hughes traded blows throughout the game.

The championship was decided by a field goal attempt with time expiring. Langston Hughes' kick was no good and Buford captured its third consecutive state title.

Class 5A: Warner Robins vs. Calhoun

Class 5A: Warmer Robins vs. Calhoun

Warner Robins score late in the first half and went on to win back-to-back championships.

Warner Robins defended its title. Calhoun fell behind early, but pulled within a touchdown in the first quarter.

Warner Robins scored late in the first half and stretched its lead from there. Warner Robins won 38-14 to repeat as state champions.

Cedar Grove was looking for its third championship in four seasons. Carver Atlanta was in the state finals for the first time since 1967.

Carver Atlanta appeared in the state championship for the first time since 1967.

Carver Atlanta got off to a good start and led. Weather interfered and a lightning delay paused the game.

Class 7A: Milton vs. Collins Hill

Class 7A: Collins Hill vs. Milton

The HIGH 5 Sports season closed with a clash of Eagles for a state championship. Collins Hill led early and its defense kept Milton in check.

Collins Hill entered the season considered the top team in the state's largest classification after falling short of a state championship in 2020.

The Eagles from Suwanee faced the Milton Eagles and led by multiple scores in the first half.