Atlanta beat the top seed in the Western Conference by 32 points, but what’s most even more remarkable about that is no one Hawk scored more than 20 point The Hawks bench provided more than a spark, putting up more than half of the scoring with 74 total points. The Hawks have five more games against teams with losing records to finish off the regular season, and they control their destiny heading towards what they hope is their first playoff appearance since 2017.

The Suns began the night even with the Utah Jazz in the race for the NBA’s best record, thanks to a five-game winning streak. Phoenix faded badly in the fourth quarter of the back-to-back following Tuesday night’s 134-118 overtime win at Cleveland.

Atlanta outscored Phoenix 38-15 in the fourth period. The Suns’ first field goal of the period was a 3-pointer by Langston Galloway with 2:33 remaining.

Atlanta led 97-88 before scoring the first 14 points of the fourth period. Rookie Onyeka Okongwu had the first three baskets of the period and scored 14 points.

Atlanta stretched its lead to 23 points, 111-88, before the Suns finally managed their first points of the quarter on Cameron Payne’s two free throws. 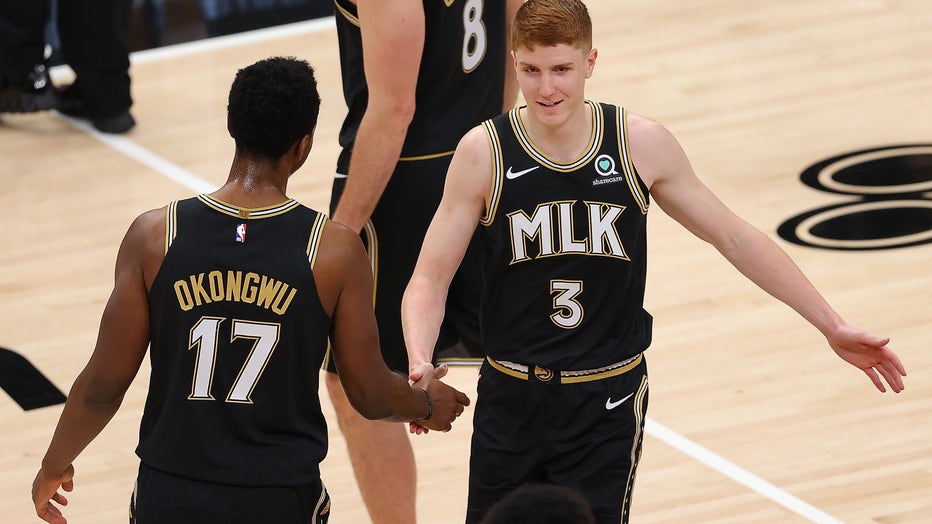 ATLANTA, GEORGIA - MAY 05: Kevin Huerter #3 of the Atlanta Hawks reacts after a three-point basket against the Phoenix Suns in the second half with Onyeka Okongwu #17 at State Farm Arena on May 05, 2021 in Atlanta, Georgia. NOTE TO USER: User express

The Hawks began the night fifth in the Eastern Conference.

Mikal Bridges, who had 18 points, was the Suns’ only other scorer in double figures.

Trae Young had 16 points and 12 assists for the Hawks. Bogdan Bogdanovic and Danilo Gallinari also had 16 points.