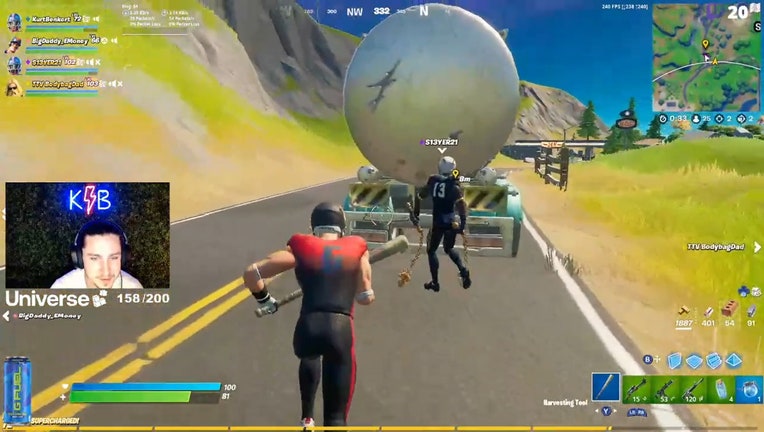 ATLANTA - A pair of Atlanta Falcons are trying to show they're the best NFL player at one of the world's most popular video games. Wide receiver Calvin Ridley and quarterback Kurt Benkert are taking part in the "Streamer Bowl II", a charity Fortnite tournament being played the Thursday before the Super Bowl.

The competition features 30 teams, each with an NFL player, a professional video gamer who parters with the streaming site Twitch and another Fortnite player who earned a spot by competing in previous events.

The Fortnite professionals -- some of whom make millions of dollars in sponsorships and prize money playing the game -- recently conducted a virtual draft to pick their teams.

"It's kind of like a fantasy draft, but instead of putting these people in your lineup, you actually play with them in a game," said Benkert.

The winning team will earn $250,000 for the charities of their choice. The specific charities will be revealed closer to the event. The professional video game players can also earn cash prizes.

The event will be held Thursday, and will feature 4 rounds. Teams can earn points by eliminating opponents and based on how well they place in the individual games. The games will be streamed on Twitch.

Benkert has built a sizable online following with his video game talents -- not limited to Fortnite, though that game in particular has a large following. Benkert has won several tournaments for NFL players and been involved in celebrity events before, so winning the Streamer Bowl would be a big accomplishment.

"100% bragging rights," said Benkert. "For me, I won back-to-back Fortnite NFLPA tournaments, so that claimed me as the best in the league, but now, this is the Super Bowl of Fortnite and NFL crossovers. This is a huge deal. A lot of money on the line."

As far as his teammate, Benkert said he is not sharing any tips with Ridley. While the wide receiver is among the league's best young offensive playmakers, Benkert said he probably doesn't have quite the same pedigree in the video game world.

"Top tier football player, maybe real bottom tier Fortnite player," said Benkert with a smile. "But he's a good team player! He'll hold the heels, he'll be around the guys, he'll give some support. He's definitely going to play that backup role this time, which is not his normal role."