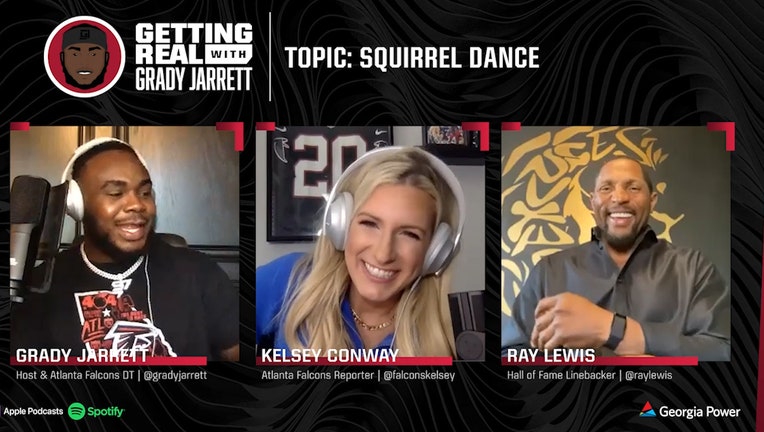 ATLANTA - It's Falcons defensive lineman Grady Jarrett like you've never heard him before.

"I think [people will] enjoy it," said Jarrett. "Authentic, fun talk. People want to know a little more about me, just giving them that."

The Rockdale County High School alum is launching a new podcast, called "Getting Real with Grady Jarrett." The show, cohosted by Kelsey Conway from the team's website, debuted on Monday, April 19 with Hall of Fame linebacker Ray Lewis serving as the first guest.

Lewis and Jarrett have been close for a long time. The first episode covers plenty of football talk, even talking about specific pass rush moves and advice Jarrett's gotten from Lewis to help his game -- but also talks about off-field topics, like Lewis' friendship with Olympic swimmer Michael Phelps. Jarrett says he wants the weekly show to talk about plenty of football but not just football.

"The big thing for me is, what lessons can be learned through the podcast you can apply to everyday life," said Jarrett. "Maybe there's something in the podcast that can give you some motivation or insight. I don't want people to think it's just straight football talk, it's a little bit of something for everybody."

The team is releasing eight episodes with new ones debuting on Mondays. The second featured podcast guest will be Clemson head coach Dabo Swinney with the rest staying a secret for now.

Jarrett is also getting ready for his seventh NFL season. He says he's been able to meet Atlanta's new head coach Arthur Smith, new general manager Terry Fontenot and other new faces in Flowery Branch. He also feels good about the Falcons chances to improve upon their 4-12 record from last season.

"I always look at the glass as half full, the best is yet to come," said Jarrett. "I'm super optimistic, I believe in the guys we do have. I feel like the new staff will bring in new guys and we'll put ourselves in the best position to win."

As for the podcast, while Jarrett has been answering questions from Atlanta media members every week during the last six NFL seasons -- and earning a reputation for being candid and available with reporters -- he's enjoying being on the other side of these interviews.

"It's cool, it's cool!" said Jarrett. "I think it flows a little naturally, too."

You can find "Getting Real with Grady Jarrett" on Spotify, watch it on YouTube or download it just about where ever you find podcasts.