Rise Up Tonight - Rise Up For Atlanta - My Cause, My Cleats

Rise Up For Atlanta features y Cause, My Cleats that highlights different charities through footwear on the field.

ATLANTA - On Sunday, 32 Atlanta Falcons will be rocking new, custom-designed cleats to raise awareness for organizations and causes they care about most through the My Cause My Cleats campaign.

It's the campaign's fifth year in the NFL, but it's the Falcons' first time designing the cleats in-house, led by AMB Sports and Entertainment senior graphic designers Brittany Davis and Kaila Pettis.

Pettis, who took a Fashion Institute of Technology course on sneaker design in May, said the two women proposed bringing the art direction in house to better tell the Falcons' stories through their cleats.

"Of course that’s something that happens every year, and I thought that would be an awesome opportunity to merge the two and basically connect with the players to tell their stories as well," Pettis said.

Pettis, who's been with AMB Sports and Entertainment for two and a half years, said she typically loves to design retail items like T-shirts or hats, but enjoyed translating her sneaker obsession to her day job.

"We thought we could take My Cause My Cleats and elevate it to a new level," Davis said. "Not just doing the storytelling on what the players tell us, but we could do a little more integrated storytelling. The biggest thing we wanted to do was take on the charge that was kind of placed before us of how we could better connect the community and our players and our fans and the storytelling and tell the story of our players in a different way and in this case using the cleat as the canvas."

More than 1,000 NFL players are participating this year, which the league said is a record since the player-led campaign began in 2016.

Davis and Pettis said tight end Hayden Hurst and defensive tackle Grady Jarrett were among the most involved in the design process.

"It was just cool to see them excited about it and being a part of the process and taking the time to look at everything. I think overall they were just excited for this opportunity because I don’t know how many of the players had cleats done before," Davis said. "But it was exciting to get feedback, like, ‘Oh Hayden loves his cleats, he thinks these are dope.’ That kind of gets us amped up that we’re doing this right and they’re going to be excited to work with us again." 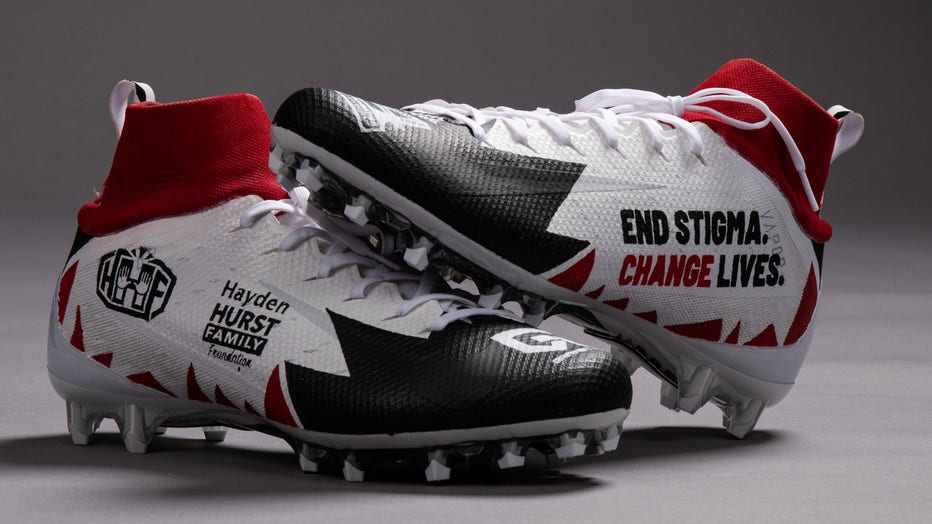 Pettis said Hurst's cleats, spotlighting mental health awareness along with his foundation, the Hayden Hurst Family Foundation, were her biggest challenge and the ones she can't wait to see on Sunday.

"Of course any time you make something you’re excited to see your baby out in the world, so we’ll be like proud parents in the stands, like, 'Oh my gosh!'" she said.

For Davis, Matt Ryan's cleats — spotlighting March of Dimes and Northside Hospital — were her favorite to work on.

"I think my favorite one, and it’s not just because he’s the quarterback, but Matt Ryan’s, the design, the execution and even his cause, with the children’s hospital and March of Dimes," she said. "I was a preemie, so it has like a personal connection, but then also being able to bring the different organizations he wanted together and execute that on a cleat and then have a personal connection with it, really excited to see him lace those up this weekend."

Below is a list of the Falcons who are participating in My Cause My Cleats, what they are raising awareness for and why.

Players have the option to raise funds for their cause of choice through auctioning their cleats on NFL Auction, where 100 percent of funds raised will be donated to the charities they select. Fans may bid on player cleats at NFL.com/Auction and help raise funds for the causes nearest to their hearts.