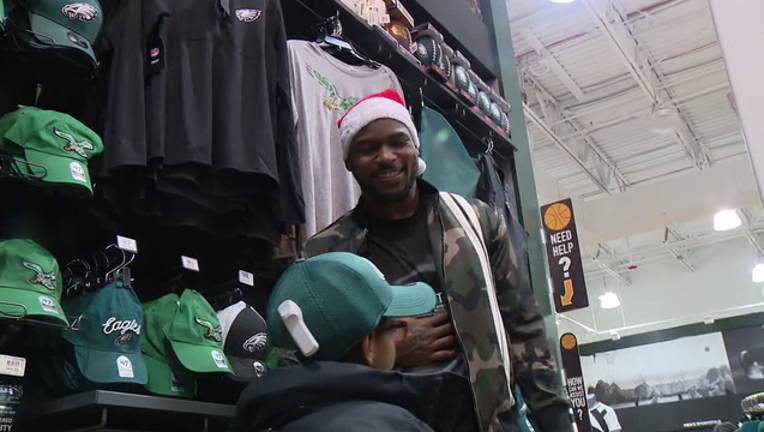 "You guys want to do some shopping? Yes?"  Four families got an early Christmas on the day after the Eagles huge upset win and even better than that the tab was picked up by Eagles Linebacker Nigel Bradham.

“It makes me happy. Obviously, an opportunity to take my role and my platform and be able to use it and be able to give back something I wasn't able to have as a kid," said Bradham.  The families got a $500 gift card to spend at Dick’s in Cherry Hill.

"You like the Eagles? Yes. They're my favorite team," said 7-year-old Sideem Gholson as he grabbed a bag and took off.

"I have an Eagles football, a Nerf blaster and an Eagles hat," said Sideem.  His grandparents brought him and six other grandchildren.

FOX 29's Shawnette Wilson tagged along with Sideem who had broken away from the group and filled his bag within the first 15 minutes.

"You're a professional shopper,” I said to him. “What does that mean?” he asked. “It means you know what you're doing. You know how to shop and find everything you want," I explained.  Sideem was so appreciative when a salesperson suggested more stuff he tried to reciprocate the kindness to Bradham.

"No, I was going to get it for him. For me? You don't got to get me a gift.  This is for you," said Bradham.  The families were selected from Northern Children's Services. It’s an adoption agency.  Linda Browner brought her six grandchildren and says Bradham is a great example of investing in children.