ATLANTA - After getting picked in the 5th round of the MLB Draft by the Philadelphia Phillies, Georgia Tech outfielder Baron Radcliff's phone was probably blowing up. That might explain why he didn't answer one particular call at first.

Then, Radcliff logged onto social media, and saw that Philadelphia Phillies star Bryce Harper tweeted about him, including video of one of Radcliff's long distance home runs.

"I saw that [Harper] tweeted me, and I was like, 'wait a minute.' I called the number back and it was him on the phone! He FaceTimed me last night, and when I saw his face, I almost dropped my phone on the floor."

Radcliff, who said Friday he'd been expected to be drafted before the 5th round, says Harper is one of his favorite baseball players to watch.

"For a guy like that, of that caliber, you know, he doesn't have to interact with me," said Radcliff. "I'm just about to be a rookie. For him to tweet at me -- which got me, probably, 700 followers on Twitter -- and send me a text, FaceTime me, it was unbelievable."

Radcliff says he's not sure what's next as he aims to start his pro career in the Phillies organization. He said he will continue working out on his own until he finds out if the team wants him to report somewhere. Minor league seasons are on hold due to COVID-19, so it is unclear when newly drafted players will be able to get back on the field. 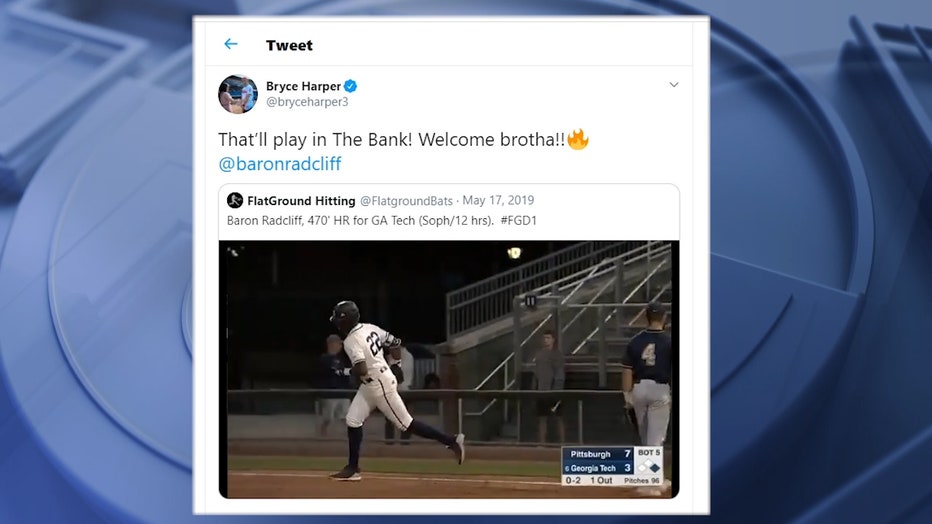