ATLANTA - The Lions let the Falcons score a touchdown. It worked — and Atlanta found another stunning way to lose.

Matthew Stafford connected with T.J. Hockenson on an 11-yard touchdown pass as time expired and Matt Prater booted a 48-yard extra point to give Detroit an improbable 23-22 victory over Atlanta on Sunday. The Lions (3-3) won their second in a row — their first winning streak since early in the 2019 season.

This was about as strange as it gets.

Trailing 16-14, the Falcons (1-6) were positioned to run down the clock and kick a chip-shot field goal for the win when they picked up a first down at the Lions 10 with just over a minute remaining.

Detroit had used up all its timeouts on the drive, so there was no further way to stop the clock. Knowing their only chance was to allow a quick TD, the Lions made no attempt to stop Todd Gurley after he took a handoff from Matt Ryan. 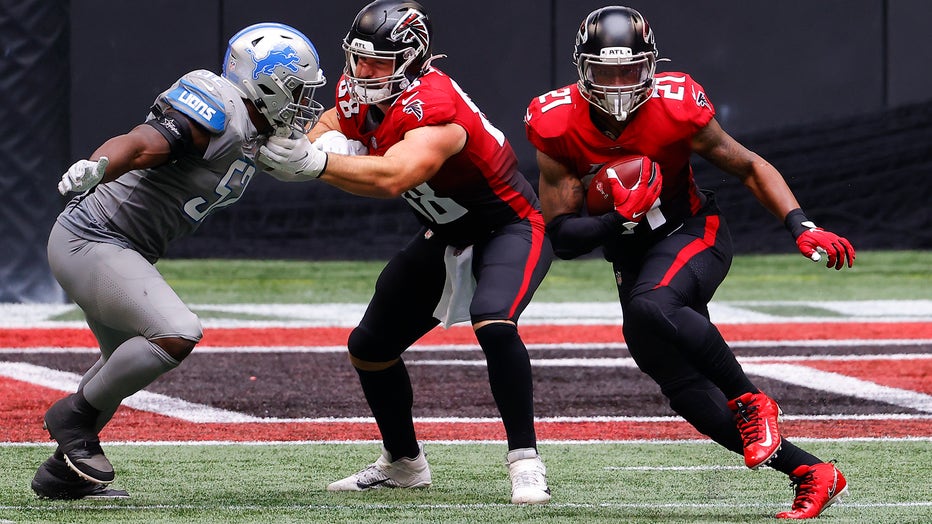 ATLANTA, GEORGIA - OCTOBER 25: Todd Gurley II #21 of the Atlanta Falcons runs the ball against the Detroit Lions during the second half at Mercedes-Benz Stadium on October 25, 2020 in Atlanta, Georgia. (Photo by Kevin C. Cox/Getty Images)

Gurley burst through an intentionally gaping hole, with only one defensive player, safety Will Harris, even putting a hand on the runner. Gurley realized what the Lions were doing — but too late. He started to fall but landed on the goal line with 1:04 remaining.

The Falcons converted a 2-point conversion to make it 22-16, but the Lions still had a chance against a team that had already become the first in NFL history to lose two straight games when leading by at least 15 points in the fourth quarter.

Stafford drove his team 75 yards in eight plays, connecting with Hockenson on a 13-yard pass, Danny Amendola for 22 yards and Kenny Golladay for a 29-yard gain to the Falcons 11. The Lions ran down the field and spiked the ball with 3 seconds left, only to have the replay booth official decided to take a look at Golladay’s catch to make sure he didn’t trap the ball.

After the catch was upheld, the Lions lined up quickly and spiked the ball with 2 seconds to go, setting up the final play. Stafford was pressured in the pocket, rolled to his left and spotted Hockenson breaking free across the end zone.

Adding one last bit of drama to a bizarre final quarter, Detroit was penalized for unsportsmanlike conduct during the celebration. That backed up the extra point to the 30-yard line, but Prater knocked through the kick to win the game.

Next up, the Falcons head to Charlotte to face an NFC South opponent, the Panthers, on Thursday Night Football. Atlanta lost to the Panthers 23-16 when the NFC South rivals played at Mercedes-Benz Stadium on Oct. 11.

Kickoff is set for 8:20 and you can watch the game on FOX 5 Atlanta!

FOX 5 Atlanta contributed to this report.