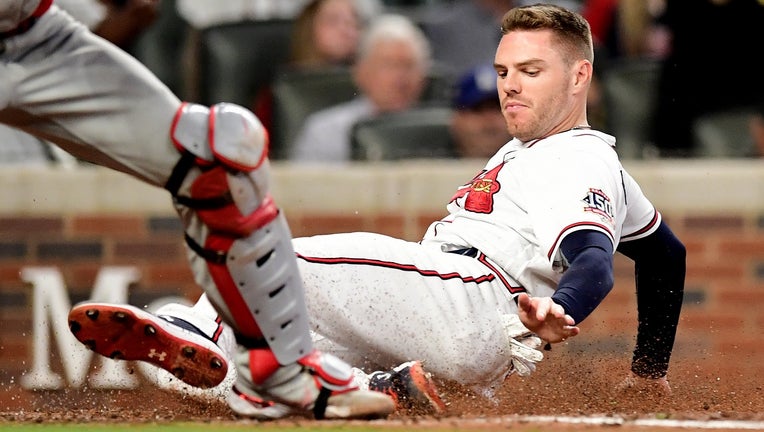 Freddie Freeman #5 of the Atlanta Braves slides safely into home on a triple hit by Ozzie Albies (not shown) during the fifth inning against the Philadelphia Phillies at Truist Park on September 30, 2021 in Atlanta, Georgia. (Photo by Adam Hagy/Getty

ATLANTA - Ian Anderson turned in another dominant pitching performance, Jorge Soler and Austin Riley homered, and the Atlanta Braves clinched their fourth straight NL East title by completing a sweep of the Philadelphia Phillies with a 5-3 victory Thursday night.

After an up-and-down season marred by injuries and legal issues but bolstered by a flurry of moves at the trade deadline, the Braves won their 21st division title since moving from Milwaukee to Atlanta in 1966.

They’ll face their former city in the playoffs when they open the best-of-five Division Series at the NL Central champion Brewers on Oct. 8.

Atlanta’s very first hitter got things rolling in the division-clinching triumph. Soler hit the first leadoff homer of his career, going deep for the 26th time this season on a 3-2 pitch from Kyle Gibson (4-6).

Riley, bolstering his improbable MVP candidacy, added to the lead with his 33rd homer in the fourth. He drove in another run with a broken-bat single in the fifth to extend the lead to 5-0.

That was more than enough for Anderson (9-5), who appears to be rounding into the sort of form he showed during the 2020 postseason as a rookie.

Anderson pitched six scoreless innings of one-hit ball before yielding a two-run homer to Andrew McCutchen in the seventh. A.J. Minter, Luke Jackson and Will Smith worked the final three innings, with Smith earning his 37th save.

The Braves endured plenty of obstacles on their way to another division title. 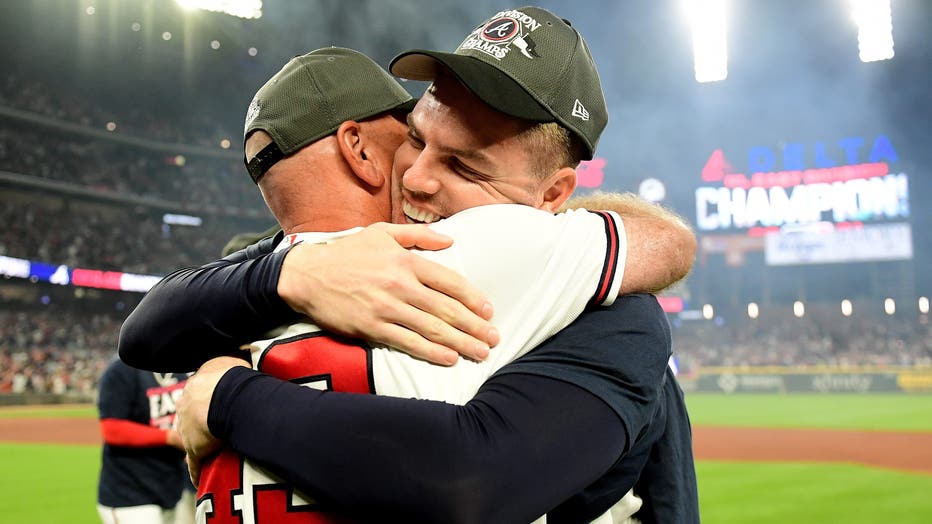 In addition, slugging outfielder Marcell Ozuna — the pot-stirring leader of the Braves’ run to Game 7 of last year’s NL Championship Series — was arrested after an altercation with his wife in late May and didn’t return to the team.

General manger Alex Anthopoulos pulled off a flurry of moves at the trade deadline, assembling an entirely new outfield that included Soler and Adam Duvall.

The Braves got hot over the second half of the season to win one of the majors’ weakest divisions. They gained sole possession of the NL East lead for the first time Aug. 15 while in the midst of a perfect 9-0 road trip and never relinquished the top spot.

Philadelphia made a late surge, getting within 1 1/2 games of the lead last weekend.

But Atlanta snuffed out the Phillies’ hopes with a stifling run of starting pitching by Charlie Morton, Max Fried and Anderson. In the series, they combined to allow just 10 hits and three earned runs over 20 innings.

When Smith struck out Ronald Torreyes for the final out, it was time for another celebration before a near-sellout crowd of 38,235. 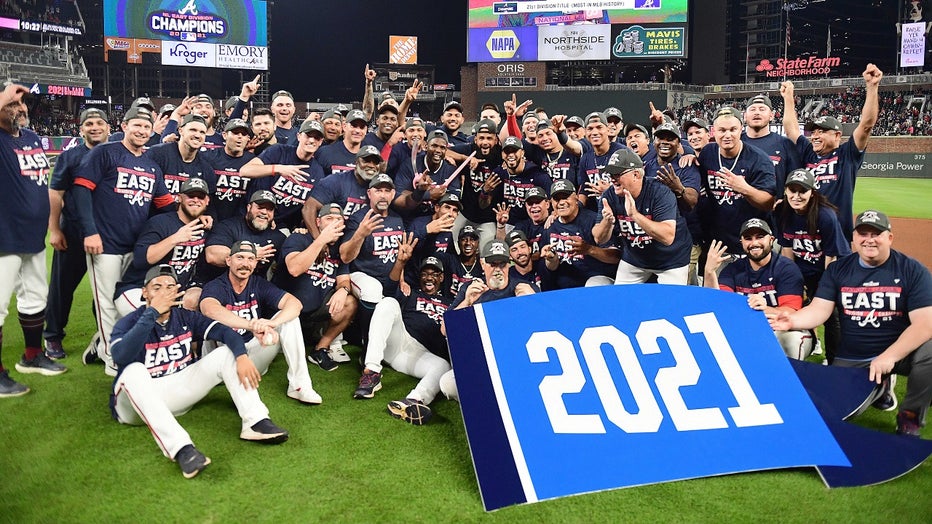 The Atlanta Braves celebrate after winning the NL Eastern Division against the Philadelphia Phillies at Truist Park on September 30, 2021 in Atlanta, Georgia. (Photo by Adam Hagy/Getty Images)

The Braves got a scare in the seventh when Freddie Freeman was plunked just above the left elbow with a 100 mph fastball from José Alvarado. Freeman needed a few minutes to regain feeling in his arm and hand, but he was able to stay in the game.

Phillies: Head to Miami on Friday night to begin a season-ending series against the Marlins. LHP Ranger Suarez (7-5, 1.45 ERA) is set to go against Miami RHP Sandy Alcantara (0-14, 3.09).

Braves: Host a weekend series against the New York Mets that will serve as final tune-up for the playoffs. RHP Huascar Ynoa (4-5, 3.98) is set to make his last start of the regular season Friday night.