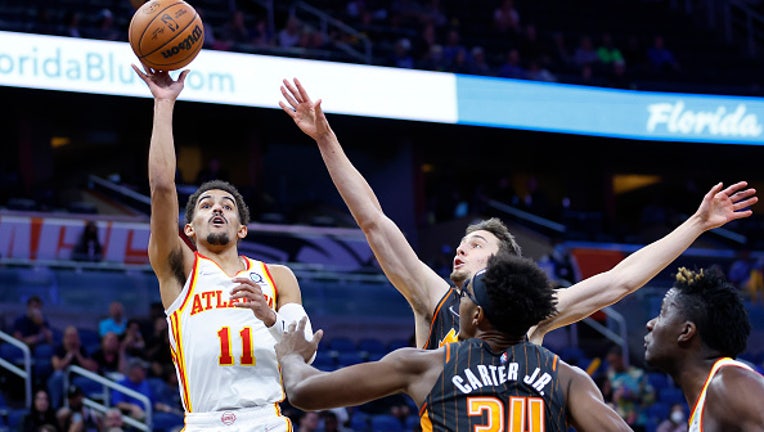 ORLANDO, FLORIDA - DECEMBER 15: Trae Young #11 of the Atlanta Hawks shoots against the Orlando Magic during the first half at Amway Center on December 15, 2021 in Orlando, Florida. NOTE TO USER: User expressly acknowledges and agrees that, by downloa (Getty Images)

ATLANTA - As the National Basketball Association is grappling with a surge in positive COVID-19 cases, the Atlanta Hawks' game against the Cleveland Cavaliers on Sunday has been postponed.

The Hawks announced the postponement today on the team's official Twitter account. The Hawks did not announce the date of the rescheduled game.

Two other NBA games were postponed on Sunday in addition to the Hawks-Cavaliers game. The Cleveland Cavaliers, Orlando Magic and Philadelphia 76ers all had their next games postponed and the Brooklyn Nets had the next two games postponed, citing the NBA’s Health and Safety Protocols.

Cleveland had at least five players test positive for COVID-19 on Sunday, a person familiar with the team’s situation told The Associated Press.

Heading into the game, the Hawks were struggling in the midst of a six-game home losing streak.