It's the end of the Matt Ryan era for the Falcons. The NFL quarterback has been traded to the Indianapolis Colts. FOX 5 Sports Anchor DJ Shockley caught up with the former Falcons QB, where he tells fans they'll still see him around Atlanta.

ATLANTA - Matt Ryan's career in an Atlanta Falcons jersey started and ended with a touchdown pass.

In between those two moments were countless other highs and lows over Ryan's 14 years in Atlanta that he said he'll always remember fondly.

On Thursday, Ryan sat down with his former teammate, FOX 5 Sports Anchor D.J. Shockley, to reflect on those memories as well as look to Ryan's future now as an Indianapolis Colt.

"There's change in life, but the one thing that won't change is the last 14 years and how I feel about this city," Ryan told Shockley. "I'm so thankful for all the fans' support and the love that we've received while we've been here."

Ryan said "one of the coolest moments of my entire life" was hearing the crowd chant "M-V-P" during the NFC Championship Game on Jan. 22, 2017, the last game in the Georgia Dome and before he led the Falcons to Super Bowl LI.

His first playoff win against Seattle. A back-shoulder touchdown pass to Julio Jones in the NFC Championship Game.

"I think of Roddy (White) doing cartwheels in the end zone and his smile and laugh," Ryan reminisced.

"Celebrating in New Orleans when we beat them down there is always a good thing too. That'll never change for me," he said, laughing.

He smiled, recalling that first touchdown pass in 2008, and celebrating with Shockley on the sideline.

"You just sat down next to me, like, ‘What just happened?’" Shockley recalled.

"No doubt," Ryan said. "I feel a lot like that right now. I'm sitting here 14 years later like, ‘What just happened?’ It was an incredible ride, and it goes in the blink of an eye."

Thinking back on all those good memories, Ryan said, adds a unique, strange layer to the wild week he and his family have had. 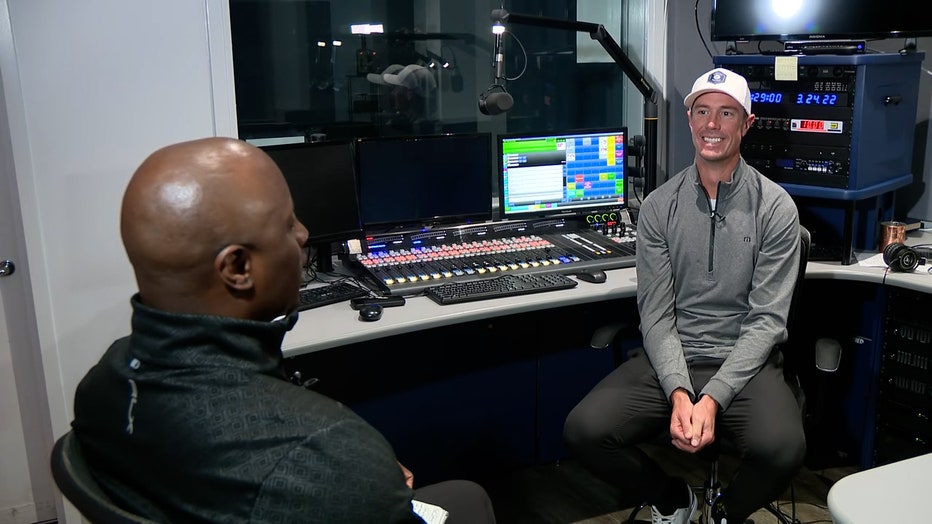 He said it was the first time in his career he had an "uncomfortable feeling of not knowing" whether he would remain with the same team. He tried to put it in perspective that many in the NFL feel that pressure every week.

"Four or five days is not going to affect the 14 years that I just had. No matter how I felt, disappointed, it's just not going to change the fact that the 14 years I was here was incredible," he said. "Would I want things changed? Would I want things different? Yeah. Sure. Everything could be smoother, but they were professional. They had a tough decision to make, they made it, and I made my decision. At the end of the day, I think we're all in a good spot."

On Sunday night, Ryan said he talked with Arthur Smith amidst the team "exploring" the Deshaun Watson option, "and then it accelerated."

"I think there was still ambiguity on their side of how things were going to shake out," Ryan said. "I'm not here to defend anybody, but I think they didn't know all of the variables in play also."

"There's disappointment at first, when you're like, 'What? What are you talking about?' So it hurts, when you've been so committed to something; for 14 years every day you wake up, you're 100 percent all in."

Despite the emotional roller coaster he and his family have been on this week, Ryan told Shockley he couldn't be more excited about his future in Indianapolis.

"Ultimately, I think we got to the place we needed to get to. There's frustrations, there's disappointments, there's everything,
Ryan said. "I'm just thankful for the professionalism they showed me."

The hardest part, he said, is leaving behind Falcons teammates and personnel who are like family to him after more than a decade of working together in many cases.

He said he'll be watching some of his closest Falcons teammates from afar, especially one rising star: "Kyle Pitts. Part of the bitter-sweetness is, man, I really liked playing with him, and how I think he can develop into one of the very best in this league. So I'm always going to be a fan of his and always enjoy watching him play."

"I think of other guys I'll miss – Grady (Jarrett) and the professional he is for me to play with. I'm going to miss him. There's other guys like Jake Matthews, and I've played with him a long time, and the professionalism he shows up with every day, it's impressive to see. I'm missing a bunch; I'll miss all those guys in that locker room, but those are three that stand out."

As for the fans and community of Atlanta, Ryan told Shockley, "it's not goodbye; it's thank you."

"I have to move on in my football life, but I still have the love and appreciation for everything," Ryan said. "There's been a lot of change in my life in the last week or so and I know that's the one constant, but the thing that won't change is the experience I had while I was here and the love that I felt from everybody in this city, through the ups, through the downs, and the shared frustrations we had to. Like, I get it, man. Trust me, I get the frustrations that we had too, and we kind of all went through that together, and I'm thankful for that. Also know that I'm always going to be committed to trying to make this city the place it can be, and at the forefront of, in my opinion, the change we need to see in our country. I'll never lose that."

Meanwhile, he's helping the "Ice Cubes," their twin sons Marshall and Johnny, wrap their young minds around cheering for a new team.

"Luckily they're at that age where they're loyal to whoever is giving them gifts," Ryan joked. "It was a little confusing for them at the start, because we talk about it all the time at home, because we're loyal. So they were all in on the Falcons. So kind of explaining to them that we all might be pulling for a different organization moving forward was a little confusing, but the Colts did a great job of making them feel welcome really quick with jerseys."

But Blue, the Colts' mascot, made that transition a little easier on the boys when they visited Indianapolis earlier in the week.

"The mascot up there, Blue, my kids loved him. So thank God for that guy. He was so good to them. I think he played with those kids for like six or eight hours straight," Ryan said. "I owe that guy a beer or dinner or something like that when I get up there, because he did us a solid."

And Ryan hopes to chase that elusive Super Bowl ring in Indianapolis for years to come. He said he's figured out a great routine to stay healthy at 36 years old. And, he said with rules changes evolving to protect quarterbacks in today's NFL, he hopes he can play as long as guys like Tom Brady or Drew Brees, into his 40s.

"I don't have a crystal ball," he said. "But I still feel like there's a lot more left in me."