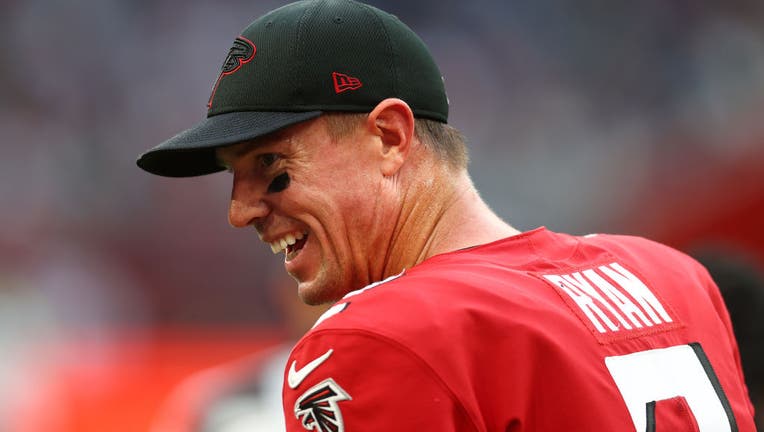 Matt Ryan looks on after during the NFL London 2021 match between New York Jets and Atlanta Falcons at Tottenham Hotspur Stadium on October 10, 2021 in London, England. (Photo by Clive Rose/Getty Images)

ATLANTA - One day after leaving Atlanta to join the Indianapolis Colts, Matt Ryan is sending his thanks to the city that he called home for 14 years.

The veteran and 2016 league MVP took out a full page ad in the Atlanta Journal-Constitution to thank Falcons owner Arthur Blank, the team's fans, and the city for their support.

"Fourteen years ago, Arthur Blank gave me the opportunity of a lifetime: to fulfill my dream of playing in the NFL, and to do it as the quarterback of the Atlanta Falcons," Ryan wrote. "From the moment I landed here, late at night just hours after having been drafted, I felt at home. The team welcomed me, balancing the typical indoctrinations of a rookie with the generous acceptance of wise and experienced veterans. The city supported me, bringing enthusiasm to games but also to the more casual interactions we had day-to-day."

In his time as a Falcon, Ryan got married, had two sons, and started his own organization to help combat systematic barrier Black youth face.

"I have long thought and often said that I would retire as a Falcon. But the changes and growth continue. As excited as I am about this next step in my career, this is a bittersweet moment," he said.

Most of all, Ryan said he was appreciative to the fans who cheered him on throughout his career.

"I have spent more than a decade playing for you, the fans of Atlanta. You have made all of this worth it, and all of this means something more than what could ever be reflected in a statistic," he wrote. "I appreciate each and every one of you and thank you, so sincerely, for the life you have given me all of these season."

Ryan had started all but three games for the team since he was drafted No. 3 overall in 2008, leading Atlanta to only the second Super Bowl appearance in franchise history.

His fate was effectively sealed when the Falcons made an ill-fated bid for Deshaun Watson as their new quarterback.

"Matt Ryan has been the epitome of a franchise quarterback," team owner Arthur Blank said. "It is difficult to overstate what he has meant to me personally, our organization, his teammates and our fans."

But the Falcons decided to move on with a major rebuilding job that was only made more difficult by Ryan’s onerous contract, which was restructured multiple times in recent years as the team kept pushing a difficult decision down the road without drafting a possible successor.

The Falcons will carry a roughly $40 million cap charge in dead money this season, while Ryan’s salary cap hit for the Colts is a reported $23.75 million in 2022, rising to $28 million if he’s still on the team next year.

"This business is not without its difficult decisions," Blank said in a statement. "While this is one of the most difficult decisions we have faced as a club, we feel it is in the best long-term interests of both the Atlanta Falcons and Matt Ryan."

Ryan's impact on the Atlanta Falcons

Ryan is undoubtedly the greatest quarterback in Falcons history, arriving from Boston College at a pivotal moment to replace Michael Vick. He steadied a franchise rocked by coach Bobby Petrino’s departure after 13 games and Vick’s imprisonment for running a dogfighting ring.

With Ryan taking over the offense as the starter from Day 1, the Falcons rebounded from a 4-12 mark in 2007 to make the playoffs in his rookie campaign — the first of five consecutive winning seasons and three postseason trips. Until Ryan’s arrival, Atlanta had never even managed back-to-back winning seasons since joining the NFL as an expansion team in 1966.

After several down years for the team, Ryan turned in his greatest season in 2016, throwing for a career-best 4,944 yards with 38 touchdowns. Atlanta appeared headed for its first Super Bowl crown when it built a 28-3 lead over the New England Patriots by late in the third quarter, only to see Tom Brady engineer the greatest comeback in title game history for a 34-28 overtime victory.

Ryan posted 10 straight seasons with more than 4,000 passing yards until just missing the mark last year with 3,968. He has thrown for at least 20 touchdowns every year of his career, totaling 367 in his career with 170 interceptions. And he has missed only three starts in his 14-year career.

Even though the Falcons made one more playoff appearance with Ryan, in 2017, they never seemed to recover from the stunning collapse on the NFL’s biggest stage. Atlanta has since endured four straight losing seasons, including a 7-10 mark last year, and has several big holes to fill.

"As we’ve said since we’ve started, we’re always evaluating and looking for opportunities to improve our team for the long term," said Arthur Smith, who is heading into his second season as the Falcons coach. "This move is another step in that and we’re looking forward to the future."