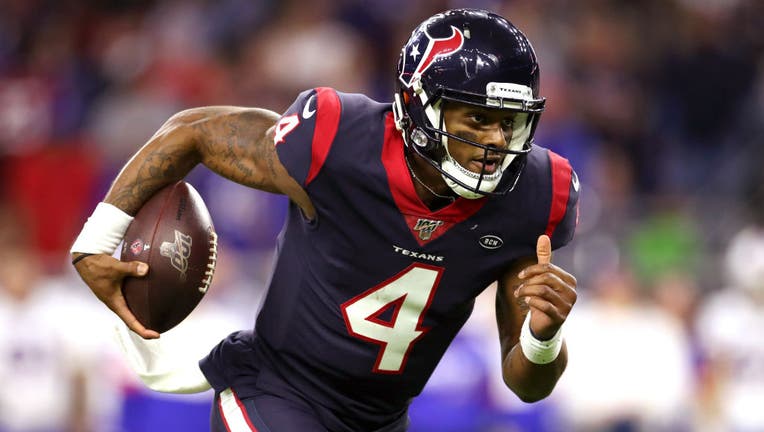 Deshaun Watson runs the ball for a touchdown against the Buffalo Bills during the third quarter of the AFC Wild Card Playoff game. (Photo by Christian Petersen/Getty Images)

HOUSTON - Freddie Freeman may not be the only big Atlanta sports name leaving our city this week.

According to multiple reports, the Falcons are pursuing Gainesville's own Deshaun Watson, which means that quarterback Matt Ryan could be traded if a deal is worked out.

The Falcons front office met with Watson in Houston Wednesday.

The Falcons are the fourth team to meet with Watson following the Saints, Panthers, and Browns. According to the NFL Network's Ian Rapoport, each team has already extended a trade offer. All four teams are willing to part with three first-round draft picks — and maybe more — to land the three-time Pro Bowler.

The 27-year-old has a no-trade clause built into his four-year, $156 million contract and would have to agree to a deal with Atlanta. The Texans are believed to be seeking at least three first-round picks for one of the league’s most talented QBs.

Watson didn’t play last season because of lawsuits from 22 women who have accused him of sexual assault or harassment, and he still faces civil lawsuits after a grand jury declined to indict him last week.

The quarterback could still face punishment from the NFL despite not being charged criminally. NFL spokesman Brian McCarthy said last week that the league is "closely monitoring all developments" and that matter "remains under review of the personal conduct policy."

A player does not have to be convicted or even charged with a crime to be disciplined under the league’s personal conduct policy.