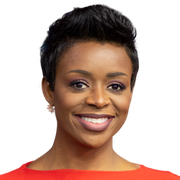 Christine comes to Atlanta after spending 11 years as morning anchor at WBTV in Charlotte, NC. While there she won numerous Midsouth Regional Emmy Awards, RTDNAC Awards and NABJ Awards. Christine anchored coverage of many breaking news events in Charlotte, from devastating hurricanes and winter storms, to news events that made national headlines like the funeral of Reverend Billy Graham, the Charleston church shooting, even the city’s sendoff when the Carolina Panthers went to Super Bowl 50. She has interviewed the likes of President Donald Trump, former First Lady Laura Bush and then-Senator Barack Obama during his first presidential campaign. Christine takes pride in keeping the public informed with accurate information about what’s going on in their community. Being rooted in the community she lives in is also important. While in Charlotte, Christine led the station’s campaign for seven years raising millions of dollars for children fighting pediatric cancer at St. Jude Children’s Research Hospital. Prior to WBTV, Christine was an anchor/reporter at KLTV in Texas and WABG in Mississippi. She is a member of the National Association of Black Journalists and Alpha Kappa Alpha Sorority, Incorporated.

Christine is no stranger to the Peach State. She is a proud University of Georgia graduate receiving a bachelor’s degree in Journalism from the Henry W. Grady College of Journalism and Mass Communication. She was also a student-athlete playing on UGA’s women’s volleyball team. After graduation, Christine lived in Atlanta for a few years before hopping around the country to start her journalism career. She’s excited to be back in Atlanta where her parents and siblings now also reside.

Christine is married to William and they have two children: Daughter, Camryn, son, William III, and pet Yorkie, Georgia II. As a family they play and watch lots of sports, and love rooting for the Dawgs during college football season!