The Astros have a bitter rivalry with the Atlanta Braves' NLCS opponent, the Los Angeles Dodgers. The intensity of that rivalry was stoked by an alleged cheating scandal during the 2017 World Series between the Astros and Dodgers. Some fans wanted revenge on the Dodgers. Others were glad to see them eliminated.

HOUSTON - Many sports fans feel they can’t pick their favorite teams, they’re born into their fandom.

Some, though, wish they could pick their opponents.

No doubt, the Atlanta Braves and Houston Astros are motivated by their own championship ambitions heading into the 2021 World Series, which begins Tuesday. Fans, however, like to follow storylines.

It was a much more subdue arrival in Houston than their sendoff in Atlanta. The Atlanta Braves arrived at Minute Maid Park on Monday evening as the team prepares for the first World Series start in 21 years. Game One against the Astros starts Tuesday evening.

Some Astros fans are glad their team is playing the Atlanta Braves. But it’s not for the reason you might think.

Astros fans FOX 5 Atlanta spoke to had great respect for the Braves and their players. Their desire for Houston to play Atlanta has more to do with their disdain for the Braves’ NLCS opponent, the Los Angeles Dodgers.

2021 WORLD SERIES: WHAT YOU NEED TO KNOW

"I was (happy Atlanta advance to the World Series) because I can’t stand the Dodgers," Astros fan Eric Wiggins said outside Minute Maid Park on Monday. "They’re cry babies. They have a lot of talented players but they expect things to be handed to them."

Game 3 and Game 4 project to be cool nights with clouds and the possibility for rain. If necessary, Game 5 on Sunday could be sunny with highs in the 60s.

Los Angeles hasn’t beaten Houston in a World Series. In fact, when the two clubs met in 2017, Houston won. But that’s why the tension between the two teams exists.

REMEMBERING PAST FALL CLASSICS IN ATLANTA

Prior to the 2020 season, before Spring Training and the season was cut short by the COVID-19 pandemic, Houston was dealing with the fallout of a cheating scandal involving the illegal use of video to steal signs. An MLB report alleged the team made noise by banging on trash cans to tip pitches. 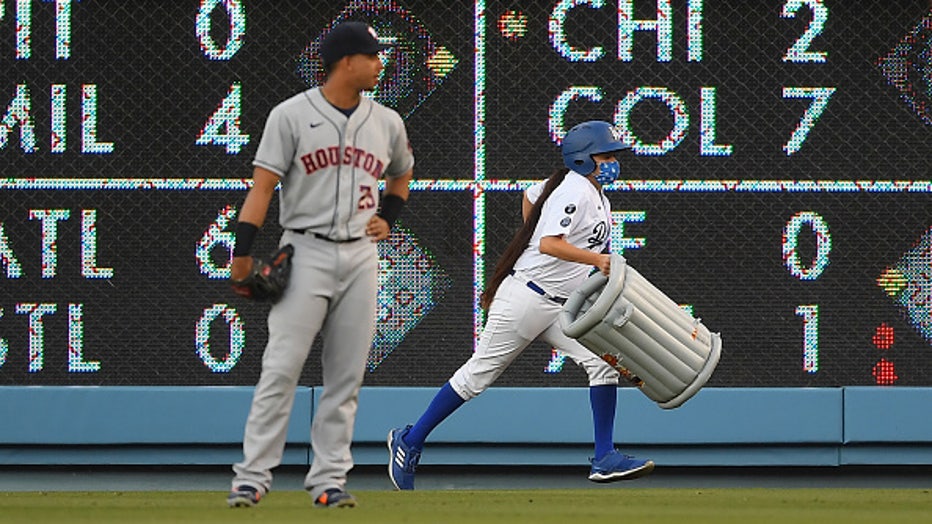 LOS ANGELES, CA - AUGUST 03: Michael Brantley #23 of the Houston Astros watches as a bat girl removes an inflatable trash can that was thrown on to the field in the first inning against the Los Angeles Dodgers at Dodger Stadium on August 3, 2021 in L

"The whole city is behind the Astros, the whole affair from a couple of years ago rings bad to all of us," Jackson Street Barbecue owner Bill Floyd said. "So we’re looking to redeem ourselves."

But Houston seems to prove the culture of winning wasn’t based on a crutch. Houston, which won 95 games this season en route to an American League Pennant, seems legitimately good.

Fan Rob Reynolds, who was walking around the park with family on Monday, said vengeance would have tasted sweet.

"I wanted the Dodgers, just for some poetic justice," he said. "We go back to the series and beat the dodgers and put away that cheating scandal once and for all."

But, he adds, there’s nothing wrong with some variety.

"It’s different, it’s good to get another team in there," Reynolds said "The Dodgers can go away, we’ve had enough of that."

For local business owner Luis Galvan, it’s just nice his team is still in the mix in late October. A little revenge isn’t enough to take away from the moment.

"With the Dodgers and issues we have, I would have liked to see the Dodgers," he said. "You don’t really want to pick the team you play because it doesn’t make sense. You play the best team."