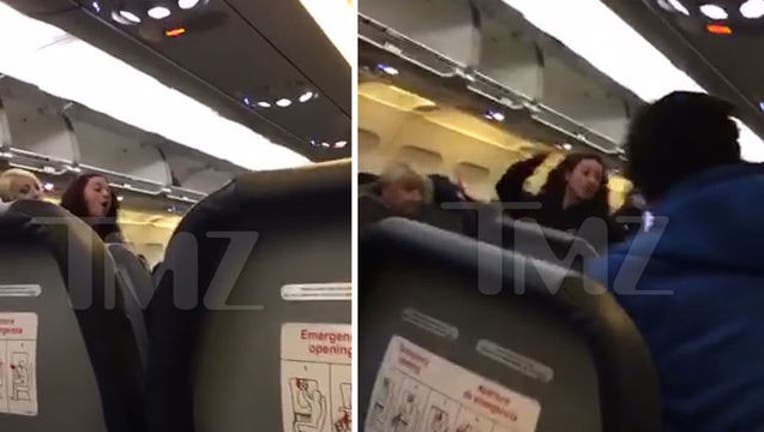 TMZ.com - The "Cash Me Ousside" girl caught someone inside an airplane Monday evening with a shot to the face ... and police ended up yanking her, her mother and another passenger off their plane ... TMZ has learned.

We've learned Danielle Bregoli and her mom were boarding a Spirit Airlines flight out of LAX last night ... when Mom got into a dispute with a female passenger. We're told Danielle's mother was struggling to put her carry-on bag in the overhead, because she's wearing a walking cast for an injured foot ... and the wait wasn't sitting well with the third party.

Danielle says the other woman put her hands on her mom's throat, and that's why she had to "cold-cock" the impatient passenger.

After Danielle uncorked the punch, the woman made a citizen's arrest. A short time later police arrived and took all 3 off the plane. We're told no one wanted to press charges so there were no arrests, and everyone involved decided their lawyers would handle it from here.

Watch the video (below). You'll hear the woman who was punched lashing out at Danielle, calling her a "w***er." You also hear the woman spit toward Danielle and her mom.

One last thing -- we're told Spirit Airlines banned Danielle, her mom and the other woman for life. Howbow dah?

Tune in to TMZ on TV weekdays Monday through Friday (check http://www.tmz.com/when-its-on for syndicated/local listings at the bottom of the page)