Huge bear gets stuck in dumpster

PLACER COUNTY, Calif. - He's so well known among law enforcement officials in the Tahoe area, they've given him a name. They call him "T-Shirt.” With his huge stature he's not difficult to identify.

"T-Shirt” found himself in a bit of a predicament after the bear got stuck in a dumpster in Kings Beach in search of food early Monday morning.

With their flashlights in hand, Placer County sheriff's deputies arrived on scene during the predawn hours to see how they could help.

The rescue was caught on video and posted on social media by the sheriff's office.

Once the bear pops its head out of the dumpster, one deputy instantly recognizes him. The deputy is heard saying, "That is T-shirt!" 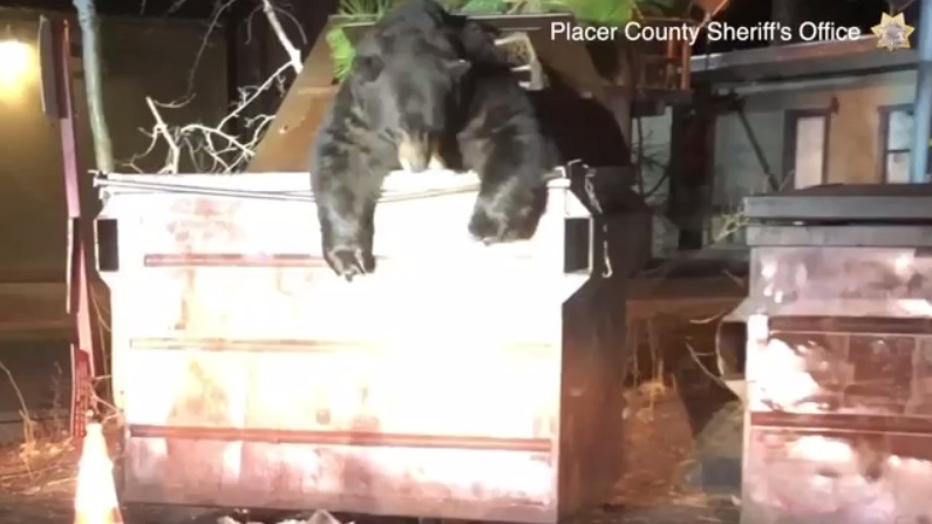 The deputies are then seen opening up the dumpster to help the bear crawl out.

Eventually T-Shirt is able to hurl his large body over the top of the trash receptacle, to the encouraging words of his rescuers.

"Good boy!" a sheriff official calls out to the bear who seemed stunned for a moment before he makes his way out of area.

"Luckily for T-Shirt, Deputies Bertoni and Staley were able to help him get out of his predicament," the sheriff's office wrote on Facebook.

And if you're wondering how he got his name, in addition to his huge size, he also has a distinctive white patch of fur on his chest, which makes him look like he's wearing a T-shirt.