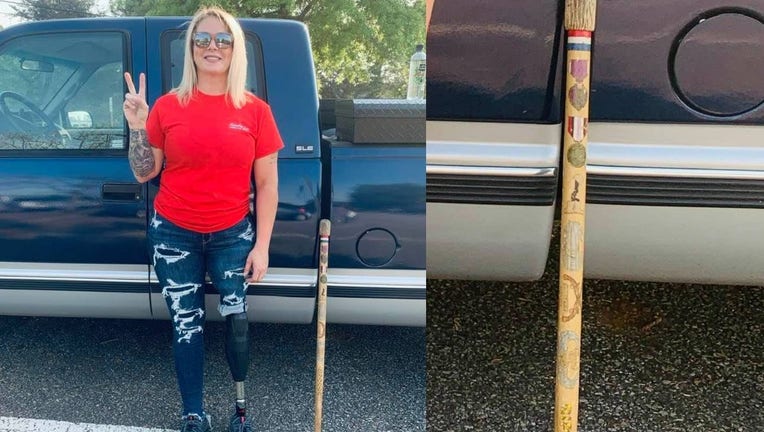 Veteran Kendra Pieper says the cane was taken by someone in a white Suburban from a Chevron gas station in Newborn, Georgia. (Courtesy of Kendra Pieper)

NEWBORN, Ga. - A Georgia military veteran is asking the public to help find a missing cane, which has sentimental value to her.

In a Facebook post written Wednesday, veteran Kendra Pieper says she stopped at a Chevron gas station in Newborn, Georgia, earlier this week to fill up.

Pieper tells FOX 5 she drove off and didn't realize she left her cane leaning against the pump. By the time someone went back to get it, the cane was gone.

According to Pieper, the gas station's surveillance cameras captured someone in a white Suburban pull up after and take the cane. Unfortunately, the camera was not able to pick out the vehicle's tags.

"I don’t care who, what, where, when, or why. I just want my cane back," the veteran wrote on Facebook. "I feel that my cane told my story without me saying a word. It answered people’s questions without them having to ask."

Pieper says she was given the hand-carved cane shortly after losing her leg. It had each of her military badges on it as well as her Purple Heart medal and her Fallen Soldier Battle Cross.

The cane also says "Ripcord" because Pieper says that was her call sign downrange.

Since posting her story on Facebook, it's been shared nearly 250,000 times on the social media platform.