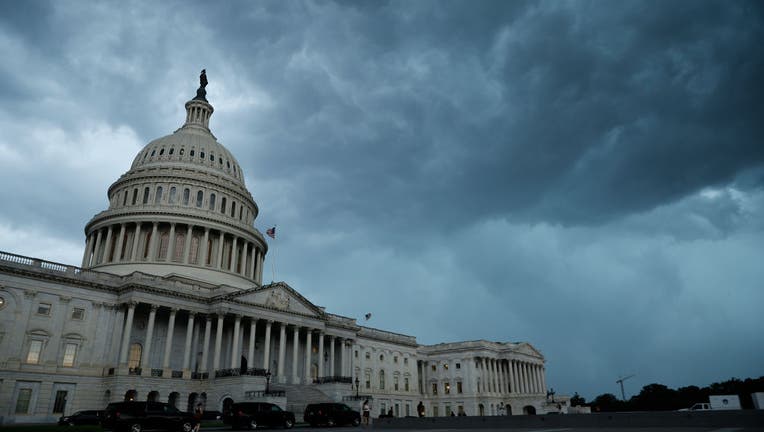 WASHINGTON, DC - JULY 25: Thunderstorm clouds roll over the U.S. Capitol on July 25, 2022 in Washington, DC. The storms prevented many members of Congress from returning to the capital on Monday, forcing the Senate to postpone a procedural vote on th

"This bill is really about three things: jobs, jobs and jobs. It's about jobs right now and jobs well into the future," said Sen. Rev. Raphael Warnock, D-Georgia.

In April, Sen. Warnock was assigned to the conference committee tasked with hammering out a compromise between the House and Senate versions of the legislation.

According to the Congressional Budget Office, the bill appropriates $54 billion to federal agencies including the Department of Commerce to institute programs to "strengthen" domestic production of semiconductors, microchips and telecommunication equipment.

Sen. Warnock said it will help address some supply chain issues the country has experienced in the wake of the COVID-19 pandemic because most of the world's microchips are currently produced in Asia.

"The Kia plant in West Point, Ga., for example, had to shut down last year on a couple of occasions and the workers had to stay home missing money out of their paychecks not because of a lack of customers, but a lack of microchips," Sen. Warnock said.

The legislation also includes a section that provides additional federal funding for research and development and universities across the country.

"Investments in HBCUs, investments in some of our smaller universities like Middle Georgia State, like Columbus State where they're very bright, young people, but they often don't have access to the kinds of investments in STEM that make for a future in a STEM career," explained Sen. Warnock.

The overall price tag of the bill is about $280 billion.

"What taxpayers are doing are rebuilding an industry that was destroyed by the industry itself by going abroad in search of more profit," said Sen. Sanders.

Warnock, however, said he was grateful to have played a part in getting the legislation passed.

"This is an investment in our people, and it's an investment in the future workplace, and I'm proud that we're able to get this done on a bipartisan basis," said Sen. Warnock. "Think about how seldom that happens here in Washington."

The House of Representatives must now approve the bill before it heads to President Joe Biden's desk.