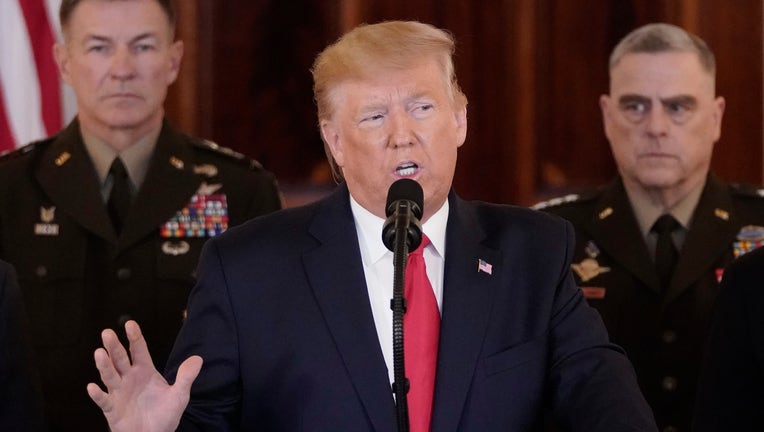 WASHINGTON, DC - JANUARY 08: U.S. President Donald Trump speaks from the White House on January 08, 2020 in Washington, DC. During his remarks, Trump addressed the Iranian missile attacks that took place last night in Iraq and said, “As long as I am

The U.S. and Iran stepped back from the brink of possible war Wednesday, as President Donald Trump indicated he would not respond militarily after no one was harmed in Iran’s missile strike on two Iraqi bases housing U.S. troops.

Speaking from the White House, Trump seemed intent on deescalating the crisis, which reached a new height after he authorized the targeted killing last week of Gen. Qassem Soleimani, the head of Iran’s elite Quds Force. Iran retaliated overnight with its most direct assault on America since the 1979 seizing of the U.S. Embassy in Tehran, firing more than a dozen missiles from its territory at the U.S. installations.

Trump credited an early warning system “that worked very well” for the fact that no Americans or Iraqis were killed. He added that Americans should be “extremely grateful and happy” with the outcome.

Trump, facing one of the greatest tests of his presidency, said Wednesday that Iran appeared to be “standing down” and said the U.S. response would be to put in place new economic sanctions “until Iran changes its behavior.”

The strikes pushed Tehran and Washington perilously close to war and put the world’s attention on Trump.

The Iranian strikes came days after Trump authorized the targeted killing of Gen. Qassem Soleimani, the head of Iran’s elite Quds Force. Iran had pledged to retaliate, though its actions did not appear to result in any American casualties, according to a U.S. official. The missiles targeted two bases — one in the northern Iraqi city in Irbil and the other at Ain al-Asad in western Iraq.

Iran, for days, had promised to respond forcefully to Soleimani’s killing, but its limited strike on two bases — one in the northern Iraqi city in Irbil and the other at Ain al-Asad in western Iraq — appeared to signal that it was also uninterested in a wider clash with the U.S. Foreign Minister Mohammad Javad Zarif tweeted that the country had “concluded proportionate measures in self-defense.”

Trump, who is facing reelection in November, campaigned for president on a promise to keep the United States from engaging in “endless war.”

Speaking Wednesday he said the United States is “ready to embrace peace with all who seek it.”

Trump opened his remarks by reiterating his promise that “Iran will never be allowed to have a nuclear weapon,” even as that country announced in the wake of Soleimani’s killing that it would no longer comply with any of the 2015 nuclear deal’s limits on enrichment that had been put in place to prevent it from building a nuclear device.

But he seized on the —at least temporary — moment of calm to call for new nuclear negotiations to replace the 2015 deal from which he withdrew the U.S., objecting that it didn’t limit Iran’s ballistic missile programs or constrain its regional proxy campaigns like those led by Soleimani.

The president spoke directly to Iran, saying, “We want you to have a future and a great future.”

Trump also announced he would ask NATO to become “much more involved in the Middle East process.” While he has frequently criticized NATO as obsolete and has encouraged participants to increase their military spending, Trump has sought to have the military alliance refocus its efforts on modern threats.

Turkish President Recep Tayyip Erdogan and Russian President Vladimir Putin in a joint statement after a closed-door meeting on Mideast security had warned that the further use of force “would lead to a new cycle of instability and would eventually damage everyone’s interests.”

However, in the hours before the missile strikes, Trump warned the longtime U.S. foe, “If Iran does anything that they shouldn’t be doing, they’re going to be suffering the consequences, and very strongly.”

And Iran’s Supreme Leader Ayatollah Ali Khamenei, speaking on Wednesday, said the strike was not necessarily the totality of Iran’s response.

“Last night they received a slap,” Khamenei said. “These military actions are not sufficient (for revenge). What is important is that the corrupt presence of America in this region comes to an end.”

The counterattack by Iran came as Trump and his top advisers were under pressure to disclose more details about the intelligence that led to the American strike that killed Soleimani. 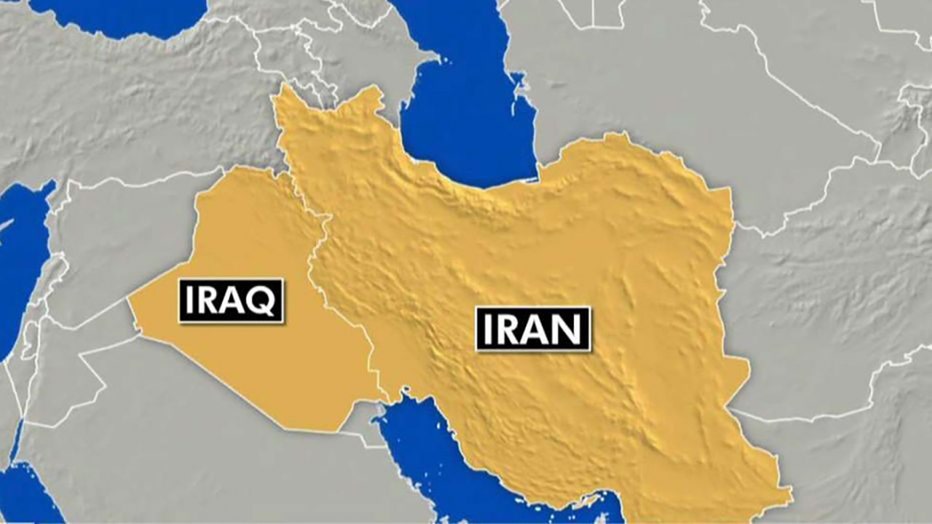 The Iranians fired a total of 15 missiles in the latest strikes, two U.S. officials said. Ten hit the Ain al-Asad air base in Iraq’s western Anbar province and one targeted a base in Irbil in Iraq’s semi-autonomous Kurdish region. Four failed, said the officials, who were not authorized to speak publicly about a military operation.

According to a U.S. official, early warning systems detected the missile launches and alarms sounded, giving personnel at the bases time to get to shelter. Officials also said that the U.S. was closely watching the region and communicating with allies, and was aware of preparations for the attack. It’s unclear if any intelligence identified specific targets or was more general in the potential strike locations.

Two Iraqi security officials said a missile appeared to have struck a plane at Ain al-Asad, igniting a fire. There were no immediate reports of casualties from the attacks, according to the officials, who spoke on condition of anonymity as they had no permission to talk to journalists.

Ain al-Asad was first used by American forces after the 2003 U.S.-led invasion that toppled dictator Saddam Hussein, and it later was used by American troops in the fight against the Islamic State group. It houses about 1,500 U.S. and coalition forces. Trump visited it in December 2018, making his first presidential visit to troops in the region. Vice President Mike Pence visited both Ain al-Asad and Irbil in November.

Rep. Eliot Engel, D-N.Y., the chairman of the House Foreign Affairs Committee, said the administration needs to quickly “extricate us from what could lead into a full-fledged war with terrible casualties.” Engel said he feared the situation ”spirals out of control.”

UKRANIAN AIRPLANE CRASHES NEAR IRAN'S CAPITAL, KILLING ALL ON BOARD

The fallout for Trump’s order to kill Soleimani had been swift.

Iraq’s Parliament voted to expel U.S. troops from Iraq, which would undermine efforts to fight Islamic State militants in the region and would strengthen Iran’s influence in the Mideast.

The counterattack by Iran came as Trump and his top advisers were under pressure to disclose more details about the intelligence that led to the American strike that killed Soleimani.

Top Senate Democrats, citing “deep concern” about the lack of information coming from the Trump administration about the Iran operation, called on Defense Department officials to provide “regular briefings and documents” to Congress.

Minority Leader Chuck Schumer and the senators said in a letter Wednesday that the White House’s classified War Powers notification to Congress was “generic, vague, and entirely inconsistent in its level of detail” compared with the norm.

They also registered their “grave concern” with Trump’s comments on targeting Iranian cultural sites and asked for clarification. Members of Congress were to be briefed on the strike Wednesday afternoon in closed-door sessions on Capitol Hill.

Trump and top national security officials have justified the airstrike with general statements about the threat posed by Soleimani, who commanded proxy forces outside Iran and was responsible for the deaths of American troops in Iraq.

But the details have been scarce.

Soleimani was targeted while he was at an airport in Baghdad with Abu Mahdi al-Muhandis, a veteran Iraqi militant, who also was killed.