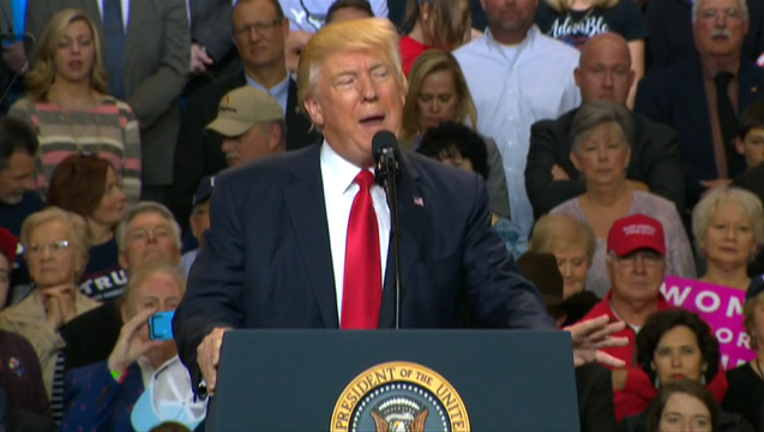 NEW YORK (AP) - The priorities laid out in President Donald Trump's budget message have some small business owners strategizing how they might benefit from a big boost in defense spending, and others thinking about how to make up for revenue they could lose to cuts in grant programs and subsidies.

While Trump's plan, released March 16, is far from the final word on the subject, he has called for a $54 billion increase in the Pentagon's budget. He has proposed cuts elsewhere, such as the Environmental Protection Agency and the Commerce Department, and no funding at all for 19 agencies including the National Endowment for the Arts. Departments and agencies across the government have programs that benefit small companies or offer them contracting opportunities.

"It's the opening bid in the negotiations," says David Primo, a professor of political science and business at the University of Rochester. The formal request that will go to Congress is expected in May, and even that version will be subject to negotiations among lawmakers.

Still, the proposal does give small business owners a sense of Trump's goals, not only for the fiscal year that begins Oct. 1, but for the rest of his term.

A look at how four business owners believe Trump's objectives could affect them:

AN END TO SUBSIDIES?

Air Choice One would lose revenue if the administration succeeds in ending funding for the Essential Air Service program, says Shane Storz, the company's CEO. The St. Louis-based carrier gets federal subsidies under the program aimed at making it easier for people who live in rural areas to catch flights nearer their homes.

The company has 56 subsidized flights a day, sending eight-seater turboprops carrying about 2,000 passengers a month to seven small cities in Iowa, Illinois, Michigan, Tennessee and Arkansas. The federal program subsidizes 60 percent to 70 percent of the cost of Air Choice One's flights, Storz says. If the program's funding is reduced or eliminated, the airline would have to cut flights, forcing many passengers to drive two or more hours to an airport served by a major airline.

"We get a lot of elderly travelers who don't want to drive," Storz says.

Air Choice One's subsidized flights run at 80 percent of capacity, a number consistent with major carriers. Storz is trying to increase ridership so the subsidized routes can be sustained even if funding is cut. The Trump administration says ending funding entirely would save the government $175 million.

"If the program ended, it would hurt tremendously," Storz says.

Inquiries about Frontline Selling's sales management software shot up after the call for higher defense spending was released, co-owner Mike Scher says. His customers, technology providers to government contractors and subcontractors, are hoping for a jump in sales under the budget plan and from Trump's call during a speech to Congress for $1 trillion in government and private spending on infrastructure.

"They believe that's going to come to fruition," says Scher, whose company is based in Alpharetta, Georgia, an Atlanta suburb. "They're ramping up their business."

That has already helped Frontline Selling. Scher expects that his company's first-quarter revenue will rise 10 percent to 15 percent from a year ago, and there's a growing backlog of orders to fill. He's optimistic enough about government spending that he plans to hire five employees in the next quarter, increasing his staff to 55.

Charles Markman looks at the budget proposal's call for a 13 percent reduction in Department of Transportation funding and hopes that would mean no new regulations governing the drone industry. The co-owner of Galaxy Media, which uses drones for aerial photography in central and southern Florida, says Federal Aviation Administration regulations slowed the progress of the company's startup three years ago.

"For the better part of a year, we were significantly impeded by rules," Markman says. "The new administration recognizes the need for greater regulatory predictability."

The budget proposal did not mention regulations, but Markman noted that Trump signed an executive order in January requiring federal agencies to identify two regulations they will eliminate for every one they request.

Markman expects the budget that ultimately goes to Congress will prevent the FAA from adding staff who would write new regulations.

The possibility that the National Endowment for the Arts might lose all its funding has Shaun Breidbart concerned that some nonprofit theaters where he puts on stand-up comedy shows may take longer to pay him, or even shut down.

Any funding cut to the agency could mean individuals and organizations lose grants that range from $10,000 to $100,000. Many of the theaters where Breidbart has shows get some of their operating budgets from those grants. Executive directors of some theaters have already told him that if they lose grant money, they might not be able to give him a deposit upon signing a contract, the usual procedure.

"They're not sure they're going to be able to spare the cash," he says. And if Breidbart doesn't get those deposits, which can be several thousand dollars, he cannot pay other comedians who appear with him.

He's also afraid if the NEA is eliminated, "that next year, when I show up at a theater expecting to do a show, I'll arrive only to discover that the theater is closed."

Follow Joyce Rosenberg at www.twitter.com/JoyceMRosenberg . Her work can be found here: http://bigstory.ap.org/content/joyce-m-rosenberg