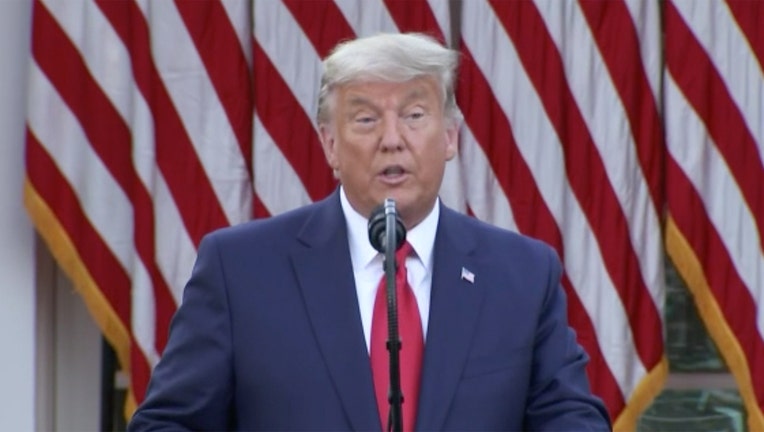 President Donald Trump speaks from the Rose Garden at the White House, Nov. 13, 2020. (Via pool)

The game on Saturday at the U.S. Military Academy's homefield in West Point, New York, will mark the first time the storied rivalry will be held at an academy's field since 1943, Chet Gladchuk told the Naval Academy's Board of Visitors.

"The president's going to make it," Gladchuk said. "I just found out a few moments ago he'll be at the game."

The game generally takes place at a neutral field. It had been scheduled to be played at Philadelphia's Lincoln Financial Field, but limits on the size of the crowd due to the COVID-19 pandemic would have prevented all midshipmen and cadets from attending. Students from both schools will be at Michie Stadium, but no fans.

While the game is usually played at a neutral stadium to accommodate a large crowd, the academies take turns as official hosts. This year happened to be Army's turn.

This will only be the sixth time the Army-Navy game has been held at the field of one of the academies, Gladchuk said. This game will even out the number of times the game has been played on an academy's home field at three each, he said.

Even though the game will be held at West Point, the stadium will still have an air of neutrality.

"The field has been changed," Gladchuck said. "The way we're seated, spacing, even the hospitality accommodations, are all split right down the middle."

Saturday's encounter will be the 121st game between the two service academies.