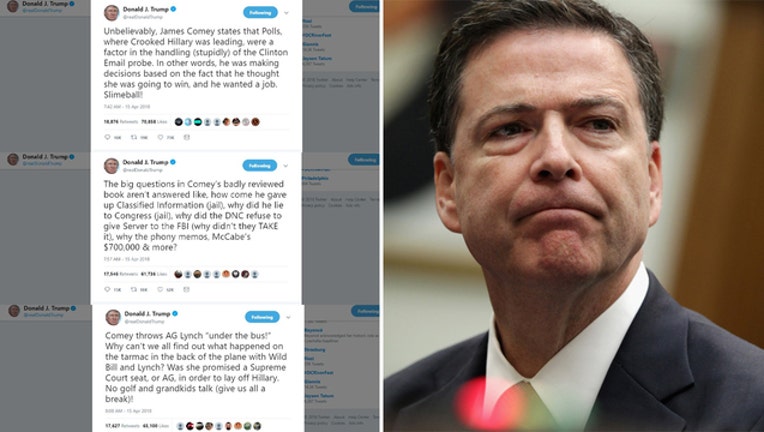 WASHINGTON - President Donald Trump took to Twitter on Sunday to unload on James Comey over his forthcoming memoir, calling him "slippery," suggesting he should be in jail and labeling him "the WORST FBI Director in history, by far!"

Trump fired off a series of tweets ahead of Comey's first interview on the book, which offers his version of the events surrounding his firing as FBI director by Trump and the investigations into Russian election meddling and Hillary Clinton's email practices. The interview will air Sunday night on ABC.

In an excerpt shown Saturday, Comey said his belief that Clinton would beat Trump in the 2016 presidential election was a factor in his decision to disclose the investigation into her emails. Trump seized on that, saying Comey "was making decisions based on the fact that he thought she was going to win, and he wanted a job. Slimeball!"

Comey's disclosure shortly before the election that the FBI had reopened its investigation into her email use enraged Democrats. After Clinton's loss, many Democrats blamed Comey, and Clinton herself has said it hurt her election prospects.

Trump on Sunday pushed back again against Comey's claims that Trump sought his loyalty, saying, "I hardly even knew this guy. Just another of his many lies." He questioned Comey's intelligence and place in history, writing, "Slippery James Comey, a man who always ends up badly and out of whack (he is not smart!), will go down as the WORST FBI Director in history, by far!"

He also suggested Comey should be imprisoned, saying, "how come he gave up Classified Information (jail), why did he lie to Congress (jail)." There is no indication Comey is under investigation for doing either.

Asked if the president wanted the Justice Department to investigate Comey, White House spokeswoman Sarah Huckabee Sanders said Sunday on ABC's "This Week" that she was not aware of a specific request. But, she said, "if they feel there was any wrongdoing, they should certainly look into that just as they do on a number of other topics."

Comey is embarking on a public rollout of his book, "A Higher Loyalty," which comes out Tuesday. In the book, Comey compares Trump to a mafia don and calls his leadership of the country "ego driven and about personal loyalty."

Former Attorney General Loretta Lynch pushed back against Comey's criticism in the book that, early in the Clinton email inquiry, she had instructed him to refer to it as a "matter" rather than an "investigation." In a statement to The Associated Press on Sunday, Lynch said she was simply following longstanding Justice Department protocol against confirming or denying the existence of an investigation. She also said that Comey never raised any concerns with her regarding the email investigation.

Trump fired Comey in May 2017, setting off a scramble at the Justice Department that led to the appointment of Robert Mueller as special counsel overseeing the Russia investigation. Mueller's probe has expanded to include whether Trump obstructed justice by firing Comey.

Trump has said he fired Comey because of his handling of the FBI's investigation into Clinton's email practices. Trump used the investigation as a cudgel in the campaign and repeatedly said Clinton should be jailed for using a personal email system while serving as secretary of state. Democrats, on the other hand, have accused Comey of politicizing the investigation.

In the interview excerpt released Saturday, Comey said he did not remember "consciously thinking" about the election results as he decided to disclose that the FBI had reopened its investigation into candidate Clinton's email use. But, he acknowledged, "I was operating in a world where Hillary Clinton was going to beat Donald Trump, and so I'm sure that it was a factor."

He added: "I don't remember spelling it out, but it had to have been that she's going to be elected president and if I hide this from the American people, she'll be illegitimate the moment she's elected, the moment this comes out."

The Republican National Committee has helped with the pushback effort against Comey for his book by launching a website and supplying surrogates with talking points that question his credibility.

On Sunday, before the ABC interview aired, Comey tweeted that his book draws on stories from his life and from lessons he has learned from others.

"3 presidents are in my book: 2 help illustrate the values at the heart of ethical leadership; 1 serves as a counterpoint," he wrote. "I hope folks read the whole thing and find it useful."