The roof of a South Fulton warehouse was ripped off by strong winds on Monday.

Severe weather brought down trees and significant debris was visible in South Fulton off Westgate Parkway. Debris was disrupting traffic on Monday at around noon.

Workers at a nearby building told FOX 5 Atlanta's Rob Dirienzo they had barely any time to get to shelter after getting a warning about the dangerous weather.

They took cover and emerged minutes later to find chaos outside.

They said they heard a lot of rumbling, saw trees bending and witnessed heavy downpours.

Storm damage near PepsiCo facility (1 of 2)

Severe storms on May 3, 2021 brought trees down and flooded roadways in various parts of Atlanta. Near the PepsiCo facility, debris could be seen scattered throughout the area.

Storm damage near Pepsico Facility (2 of 2)

Severe storms on May 3, 2021 brought trees down and flooded roadways in various parts of Atlanta. Near the PepsiCo facility, debris could be seen scattered throughout the area.

There were trees down, damaged cars and some flooding in streets near PepsiCo on Fulton Industrial Boulevard.

An air conditioning unit was ripped off the roof of the building. 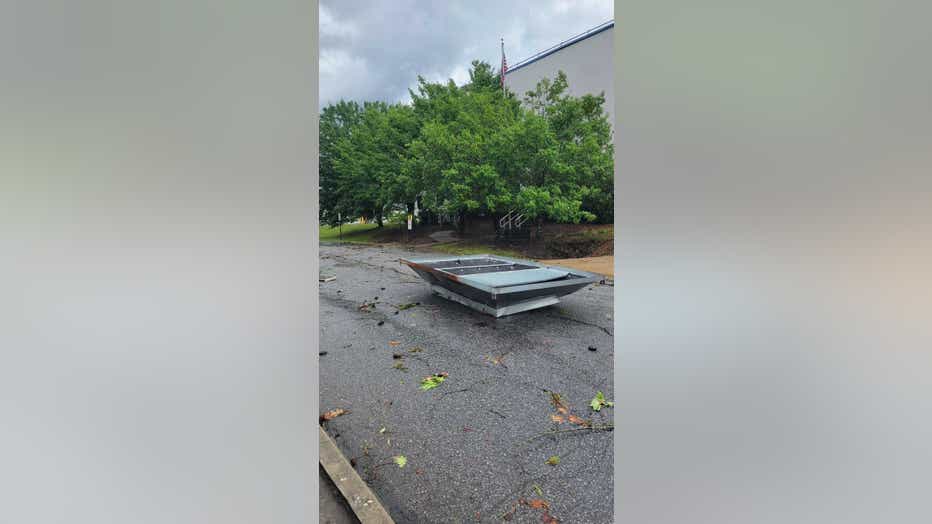 There was some damage to the interior of the building.

Traffic in north Fulton County stopped as heavy downpours wreaked havoc on the roads. The storm caused flooding on Georgia Highway 400 near I-285.

Standing water on Georgia 400 at Interstate 285 caused a traffic backup after a massive storm system passed through the area Monday morning.

Atlanta Public Schools reported its students and staff sheltered in place until 12:15 p.m. on Monday.

A Tornado Warning in Fulton and DeKalb counties expired at 11:15 a.m. on Monday.

It preceded a Severe Thunderstorm Warning in DeKalb County, Rockdale County, Walton County and Gwinnett County, which expired at 12:30 p.m.