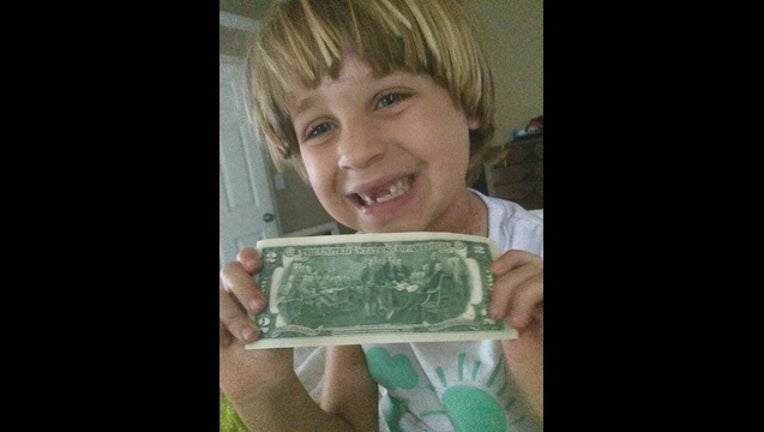 One of those childhood rites of passage is the visit from the Tooth Fairy. Traditionally, she leaves a little money after a little one loses a tooth. But, just like many of us, this winged lady also seems to be budgeting lately.

A new Visa survey says that the Tooth Fairy has dropped her price for two years running. Two years ago she was putting an average $3.70 under the pillow. It went down the following year and it's still dropping. She’s now leaving about $3.19.

I asked you on my Facebook page what you are finding under pillows at your house and I have to tell you, our FOX 5 viewers are generous!

Allison Suber Isaacs posted that at their house, “The Tooth Fairy leaves gold dollars. They get three."

At our house the Tooth Fairy leaves a silver dollar from time to time, but our five year old has lost eight teeth pretty quickly so the Tooth Fairy had to get creative. Sometimes she leaves a weathered two dollar bill.

But when our daughter Leo Rose lost her first tooth she was only four years old, so fortunately she didn't have big financial expectations. What she really wanted was a picture of the Tooth Fairy and since mom works in TV, she said, she thought that would be easy to do.  We did manage to get a glimpse of her. Take a look at the top, left-hand corner:  There are the Tooth Fairy's wings - barely there - as she's just flying out of the picture. This was for her priceless.

By the way, if anyone wants tips on how to also capture a quick snapshot of the Tooth Fairy email me at dana.fowle@foxtv.com.  I can tell you how to make that happen.