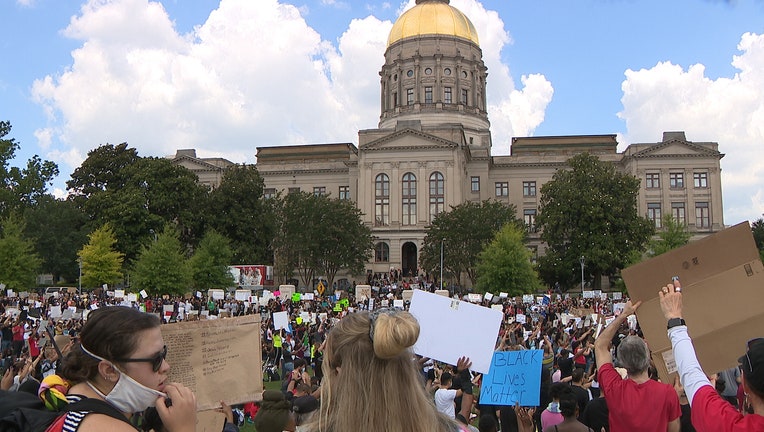 ATLANTA - Thousands of people from hundreds of different area churches marched from Centennial Olympic Park to the Georgia State Capitol on Friday. It was called the "March on Atlanta," organized by the OneRace Movement.

"We feel like the church has to lead the way and be an example to the community and to the nation," said OneRace Movement co-founder Garland Hunt.

The event started with worship in Centennial Olympic Park. Organizers hoped to bring together churchgoers from different denominations and cultures, with the hope of encouraging lawmakers to craft laws that are equitable to all people.

"Powerful, uplifting," said Carlissa Cook, who took part in the march. "Seeing every race here, coming together, praising G-d, and looking for justice."

Organizers capped attendance in the park for the morning portion of the event to 6,000 people to allow for social distancing. They said over 10,000 people registered to attend. More people who were not in the park waited by the gates for the march to the Capitol, which started around 11:30 a.m.

"It means a lot to me as a person of color to have my white brothers and sisters, and people of other races stand beside me us to say enough is enough," said Decatur's Khristine Gilbert "It's time we have justice and equity and equality across the board."

The March on Atlanta One Race Movement

Thousands of people from hundreds of different areas around metro Atlanta came together with faith leaders from several churches for a march on Atlanta marking Juneteenth.

Once at the capitol, people gathered in Liberty Plaza for speeches, prayer, and song.

"The bible commissions us, this is what God commands, that you do justly," said OneRace Movement co-founder Billy Humphrey. "Look at what the bible says about justice, then consider again how we police, consider our prison systems. Consider how we treat the most vulnerable among us. That's what we're asking for right now, compassion in governance."