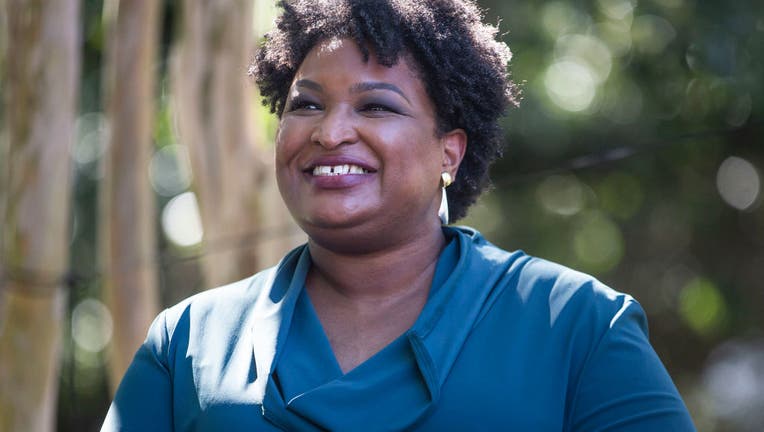 Georgia gubernatorial candidate Stacey Abrams speaks at a Souls to the Polls rally in Virginia. (Photo by Zach Gibson/Getty Images)

Hailing from different parts of Georgia, all have a deep love for our state and a strong track record of advocating on behalf of all Georgians — no matter their background or zip code. They reflect the values of servant leadership, and their strengths add to the vibrancy of the 2022 slate of Democratic standard-bearers," Abrams said. To build a stronger Georgia, we need leaders who will work for quality, affordable healthcare, defend civil and human rights, protect the right to vote and build an economy that works for everyone. Charlie, Bee and William are the proven leaders that our state needs in this difficult moment, as we ensure Georgia becomes a state where every Georgian has the opportunity to thrive."

Abrams had previously endorsed Nguyen, who occupies the state House seat previous held by the gubernatorial nominee, last week. Nguyen advanced to a June 21 runoff along with former state Rep. Dee Dawkins-Haigler after May's primary election, in which Nguyen won about 44% of the vote and Dawkins-Haigler took nearly 19%. The winner will face Republican incumbent Secretary of State Brad Raffensperger and libertarian Ted Metz in the November general election

The second endorsement comes a day after three of the candidates who didn't make to the runoff announced their support for Dawkins-Haigler.

"I stand here poised as the most qualified in this race now in the runoff with proven leadership, ready to execute the duties on Day 1 because this position is one that requires expertise in many areas, and I am that person," Dawkins-Haigler said during a news conference Wednesday at the state Capitol.

ABRAMS-KEMP SLUGFEST PROMISES TO BE PRICEY, LONG, AND UGLY

Boddie, will face entrepreneur Nicole Horn. They were the top finishers out of four Democrats seeking the nomination and will run against Republican state Sen. Bruce Thompson.

Georgia politics, once Republican-dominated, have never settled down since 2018, and the intensity is clearly driving voter interest. More than 1.9 million Georgians cast ballots in the primaries. Republican turnout of nearly 1.2 million topped the previous 2020 record, while Democratic turnout of more than 700,000, despite few compelling races, topped the 2018 midterm record, but not the 2020 record.