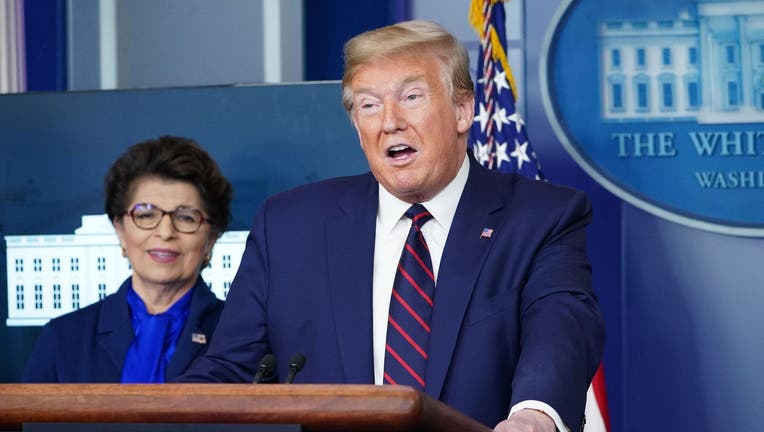 US President Donald Trump speaks flanked by the Administrator of the Small Business Administration Jovita Carranza (L), during the daily briefing on the novel coronavirus, COVID-19, in the Brady Briefing Room at the White House on April 2, 2020, in W

The Small Business Administration said on its website that the agency is "currently unable to accept new applications for the Paycheck Protection Program based on available appropriations funding. Similarly, we are unable to enroll new PPP lenders at this time."

Although Republicans and Democrats agree they need to replenish the evaporated funds for the program, a $349 billion fund approved last month as part of the CARES Act, they have remained at an impasse over how to do so.

Democrats maintain that additional cash should include emergency funding for hospitals and states, as well as some changes to the small business aid program. Republican aides said conservatives will reject any spending beyond the PPP.

The program, which launched less than two weeks ago, provides loans at ultra-low interest rates to businesses with fewer than 500 employees to incentivize them to keep staff on payroll, or rehire workers who have already been laid off. If at least 75 percent of the money goes to keep employees on the payroll, the federal government will forgive the loans.

As of this morning, there had been more than 1.62 million applications approved totaling nearly $338 billion.

Although there’s bipartisan agreement that the PPP needs additional funding, Senate Democrats last week blocked the measure from being passed, pushing for more emergency funding for hospitals and states as well as some changes to the small business aid program.

The stimulus bill passed at the end of March was $2.2 trillion, the largest in recent memory.

Time is imperative for owners. Nearly one in four small businesses has shut down temporarily in response to the crisis, while another 40 percent expect to do so within two weeks, according to a survey published by the MetLife & U.S. Chamber of Commerce Small Business Index.