Savannah police officers braved the flames to rescue the unconscious woman trapped in the burning wreck.

SAVANNAH, Ga. - Savannah police officers are being praised for their quick thinking that saved the life of a woman trapped inside a burning car.

Bodycam footage shared by the Savannah Police Department shows offers getting close to the flames after the fiery crash.

According to officials, officers were called to the crash at Henry Street near Dieter Street around 11:45 p.m. on April 26. Investigators say the driver of the 1998 Lincoln Towncar lost control of his car before crashing into a telephone pole and two trees.

When officers got to the scene, the hood of the vehicle was already in flames. The driver, 18-year-old Jaydon Brown, was able to get out, but an 18-year-old female passenger was unconscious and stuck inside. 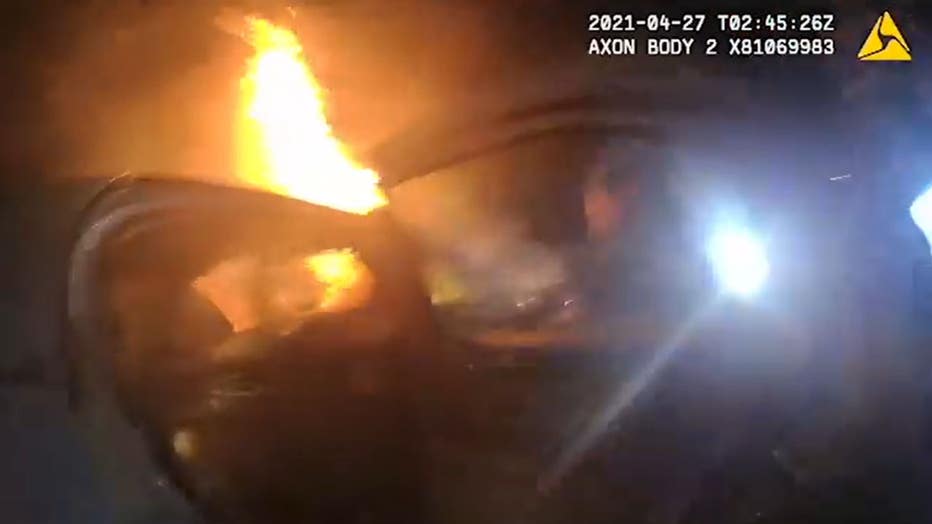 Officers managed to pull the woman out through the back of the car.

Medics took both Brown and the unidentified passenger to the hospital for treatment of serious injuries.

"I am so proud of these officers for their actions when responding to the scene last night," Savannah Police Chief Roy Minter said. "They literally ran toward the flames and worked quickly as a team to not only remove the passenger from the car but get her to a safe location. Had they not acted as they did, the passenger in the car could have suffered more serious injuries or even lost her life."

The crash remains under investigation.