Georgia DAs say they will not prosecute abortion cases

DeKalb County District Attorney Sherry Boston and Fulton County District Attorney Fani Willis both announced they would not prosecute those cases after the Supreme Court announced it overturned Roe v. Wade. FOX 5 sat down with Boston who made her stance very clear that she won’t utilize her office’s resources to go after women or anyone else assisting them in getting an abortion.

DEKALB COUNTY, Ga. - In the wake of the Supreme Court overturning the 50-year-old court decision offering constitutional protections for abortion, seven district attorneys from across Georgia has announced that they will not prosecute women for abortion-related cases.

Friday, court’s the overturning of the landmark court ruling of Roe v. Wade and Planned Parenthood v. Casey, likely leading to abortion bans in roughly half the states.

Pro-choice supporters took to the streets in Atlanta just hours after the Supreme Court handed down a ruling that overturned Roe v. Wade.

The ruling came more than a month after the stunning leak of a draft opinion by Justice Samuel Alito indicating the court was prepared to take this momentous step.

Alito, in the final opinion issued Friday, wrote that Roe and Planned Parenthood v. Casey, the 1992 decision that reaffirmed the right to abortion, were wrong had and to be overturned.

"We therefore hold that the Constitution does not confer a right to abortion. Roe and Casey must be overruled, and the authority to regulate abortion must be returned to the people and their elected representatives," Alito wrote, in an opinion that was very similar to the leaked draft. 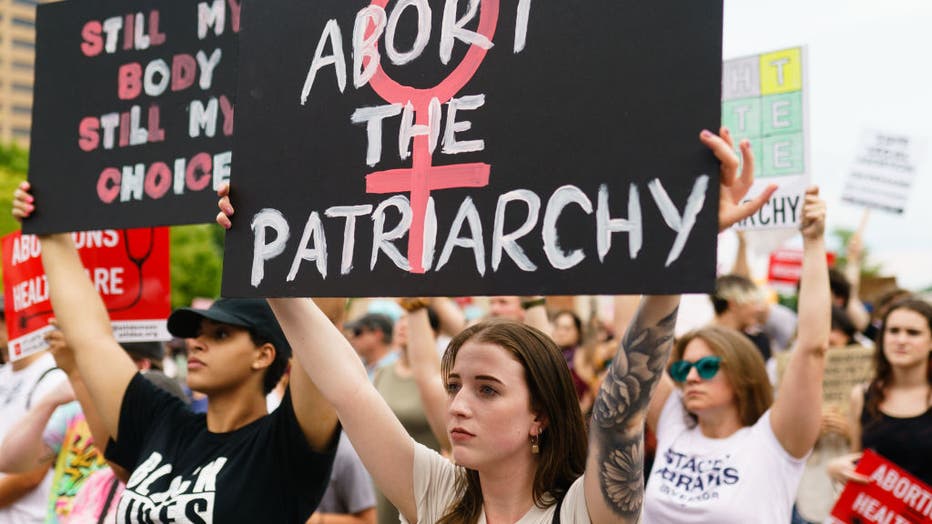 In response, 84 prosecutors across the county, including seven in Georgia, released a statement through the organization Fair and Just Prosecution saying they would "decline to use our offices’ resources to criminalize reproductive health decisions and commit to exercise our well-settled discretion and refrain from prosecuting those who seek, provide, or support abortions."

One Georgia district attorney who signed the joint statement was DeKalb County's Sherry Boston, who responded to the ruling by saying "the reality of this moment still stings."

"Anti-abortion laws endanger the lives and health of marginalized individuals whose access to safe abortion procedures will be restricted the most," said Boston. "Our focus should be on violent offenders and crimes that truly impact public safety and quality of life for the communities we serve."

Could Georgia's Heartbeat law, which has been tied up in litigation, now be fully enforced now that the Supreme Court has overturned Roe v. Wade?

Currently, abortion remains legal in Georgia, but the decision will have a direct impact on the legal issues surrounding Georgia's 2019 Living Infants Fairness and Equality (LIFE) Act, colloquially known as the "heartbeat bill." The law has remained blocked by lower courts since it was signed by Gov. Brian Kemp. Georgia Attorney General Chris Carr, a Republican, issued a statement Friday saying his office filed a notice with the 11th Circuit "requesting it reverse the District Court’s decision and allow Georgia’s Heartbeat Law to take effect."

The law makes exceptions in the case of rape and incest -- if the woman files a police report first -- and to save the life of the mother.  It also would allow for abortions when a fetus is determined not to be viable because of serious medical issues.

The law also deals with alimony, child support, and even income-tax deductions for fetuses, declaring that "the full value of a child begins at the point when a detectable human heartbeat exists."

The law would ban most abortions after about six weeks of pregnancy, when fetal cardiac activity can be detected. The measure is unlike other "heartbeat" bills in that it also contains language designating a fetus as a person for certain state-law purposes such as income tax deductions and child support.