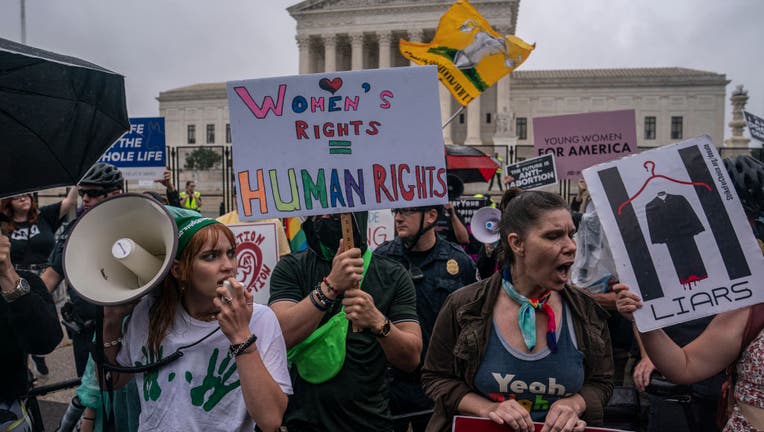 Abortion-rights activists chant during a rally in front of the Supreme Court on June 23, 2022 in Washington, DC. (Photo by Nathan Howard/Getty Images)

ATLANTA - Georgia public figures are reacting to Supreme Court's decision to end constitutional protections for abortion that had been in place nearly 50 years since Roe v. Wade.

Friday’s outcome is expected to lead to abortion bans in roughly half the states across the country, including Georgia.

The ruling came more than a month after the stunning leak of a draft opinion by Justice Samuel Alito indicating the court was prepared to take this momentous step.

News of the Supreme Court’s ruling overturning Roe v. Wade spread quickly across Georgia. Martha Zoller, executive director of Georgia Life Alliance and Georgia Gang contributor, was at a National Right to Life convention when the news hit. She said there was a lot of celebration. However, Planned Parenthood Southeast's Lauren Frazier says the court's decision, while expected, is devastating.

The decision could put into place a Georgia law that would ban most abortions once a "detectable human heartbeat" is present. Cardiac activity can be detected by ultrasound in cells within an embryo that will eventually become the heart as early as six weeks into a pregnancy, before many women realize they’re pregnant.

The law included exceptions for rape and incest as long as a police report is filed. It also provided for later abortions when the mother’s life is at risk or a serious medical condition renders a fetus unviable. The law also would have granted personhood to a fetus, giving it the same legal rights as people have after birth.

Georgia's law has been blocked since a lower court ruled the law was unconstitutional, last year a federal appeals court that it would wait until the U.S. Supreme Court ruled on a the aforementioned case.

Republican Gov. Brian Kemp, who signed Georgia's abortion law in 2019, wrote on Twitter that the court's decision was a "historic victory for life."

"I'm looking forward to its impact on the legal proceeding surrounding Georgia's LIFE Act, and hope our law will be fully implemented and ultimately protect countless unborn lives here in the Peach State," Kemp said.

Kemp's Democratic challenger in the upcoming Georgia gubernatorial race, Stacey Abrams, posted a  video expressing her frustration and anger over the overruling of the 50-year-old law.

"I am appalled. Enraged. Undaunted & ready to fight back. Our freedom matters. Our rights matter," she said. "We will not be still."

In a statement to FOX 5, Atlanta Mayor Andre Dickens called the court's ruling a "decision that wrongly and immoral tells women that their bodies are not their own."

"The choice to have an abortion is one of the hardest decisions of many women’s lives. That choice is informed by a wide variety of factors, and government should not have a role in denying that choice," Dickens wrote. "As a straight man, I have never been told by the government when, whether or how to start and raise my family. Make no mistake: this ruling will most grotesquely impact women of color and those who do not have the resources to travel to find safe and high-quality health care outside their communities where reproductive services are made illegal.

On Twitter, Georgia Sen. Raphael Warnock said he was "outraged" by the decision.

"I’ve always believed a patient’s room is too small a space for a woman, her doctor and the United States government," Warnock told FOX 5 in a statment. "The Supreme Court’s decision to overturn Roe v. Wade ends a core protection for women to make their own health care decisions, and is a departure from our American ideals to recognize and protect basic rights. This misguided decision is devastating for women and families in Georgia and nationwide."

"This Supreme Court decision sends the issue of abortion back to the states, which is where it belongs," Herschel said. "I stand for life and Raphael Warnock stands for abortion, including the heinous practice of partial birth and late-term abortion. I won’t apologize for erring on the side of life, especially considering the radical abortion views held by Senator Warnock and today’s Democrat party."

"Across the country, states have already passed dangerous and uncompromising restrictions that put politicians in charge of health care, instead of women and doctors," Warnock said. "Our work to restore the right of women to determine and access their own care must continue. I’ll never back down from this fight because women should be able to make their own health care decisions."

"I am mortified to see the work of generations of women wiped away by Supreme Court Justices who do not share the values of a vast majority of Americans," Boudeaux said. "Women’s health care is not debatable. I will keep fighting to restore what we have lost and protect our bodies, our lives, and our futures from the reactionary majority on the Supreme Court we have today."

"It's so awesome. I can't believe they just did it," Greene says in the video while you can hear protesters in the background. "I am trying not to cry."

Democratic Congresswoman Lucy McBath called the justices "extremists" who "stripped away a woman’s right to make choices about her own reproductive health care. Today, our nation’s highest court has rolled back the clock and stripped women of their liberty."

"Today, SCOTUS overturned a half century of precedent, and Dobbs will now join Plessy as one of the most regressive decisions in our nation’s history," McBath said. "I share the pain so many are feeling in America today. The freedom and autonomy that has been ripped from women today is sacred—far too personal for our government to dictate. I know the agony that women face when making difficult decisions about their reproductive health. I have faced the pain of labor without hope for a living child. And I mourn the loss that will result from this decision—restricting access to abortion care will endanger the lives of women, disproportionately Black women, in a nation with already alarmingly high rates of maternal mortality."

In a landmark decision, the Supreme Court has ruled to overturn the long-standing Roe v. Wade decision. After it being the law of the land for nearly 50 years, the nation's highest court decided to move the decision to a state-by-state basis.

Georgia Speaker of the House David Ralston argued the Dobbs decision "protects the role of federalism."

"Today’s historic decision by the U.S. Supreme Court protects the role of federalism by returning ‘authority to the people and their elected representatives’ as the Constitution demands," Ralston said. "The State of Georgia, and our House of Representatives, has long championed the rights of the unborn dating back to the Fetal Pain Bill in 2012 and the LIFE Act in 2019. I am proud that the House has also championed significant legislation to nurture a culture of life in Georgia – extending post-partum Medicaid coverage, providing a paid parental leave benefit for state employees, and modernizing Georgia’s adoption code."

Georgia state Sen. Jen Jordan, who is running for Attorney General against Republican Chris Carr in November said the decision had "horrific consequences."

"Georgia is the next battleground for reproductive freedom and the basic right of having control over one's body will not wholly depend on the actions of leaders that we elect at a local level," Jordan said. "So make no mistake about it, our fundamental rights are on the ballot this November.

State Sen. Bee Nguyen, the Democratic nominee for Georgia Secretary of State who is running against Brad Raffensperger, reminded Georgians that for now, abortion remained legal in the state.

"We must be prepared for what may lie ahead of us: contraceptives, same-sex relationships, and same-sex marriages are all at risk," Nguyen said. "Our basic freedom to exist is at stake, and we must use every tool in our power to fight back. This isn't over."

Georgia Attorney General Chris Carr, a Republican, issued a statement saying his office filed a notice with the 11th Circuit regarding the state's "heartbeat" law.

"I believe in the dignity, value and worth of every human being, both born and unborn. The U.S. Supreme Court’s decision in Dobbs is constitutionally correct and rightfully returns the issue of abortion to the states and to the people – where it belongs.

"We have just filed a notice in the 11th Circuit requesting it reverse the District Court’s decision and allow Georgia’s Heartbeat Law to take effect."