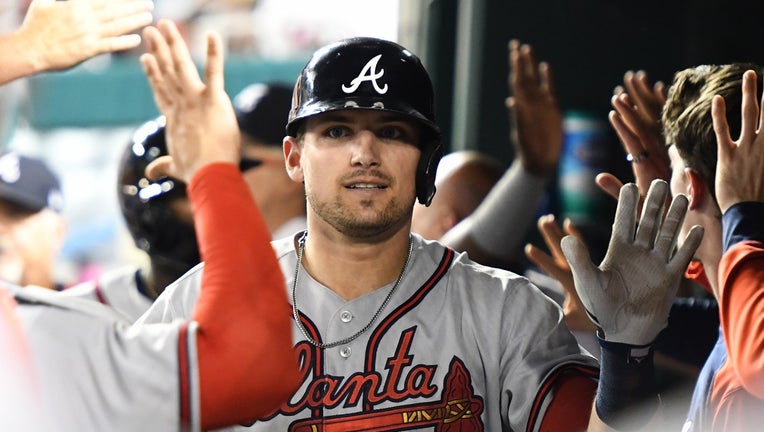 Austin Riley #27 of the Atlanta Braves celebrates a two-run home run in the eight inning during a baseball game against the Washington Nationals at Nationals Park on June 15, 2022 in Washington, DC. (Photo by Mitchell Layton/Getty Images)

Orlando Arcia, starting at second base in place of the injured Ozzie Albies, had a homer, three singles and a walk for the Braves, who went deep 13 times while outscoring the Nationals 27-11 in sweeping the three-game series.

Surging Atlanta pulled within four games of the NL East-leading Mets, who lost to the Brewers.

Riley, who also had a single, hit two-run blasts in the seventh and eighth innings, giving him 18 homers this year.

Making his 15th appearance of the season and fourth start, Strider gave up two runs on one hit with a career-high 11 strikeouts and two walks.

With the Braves leading 1-0 in the fourth, Michael Harris II extended his hitting streak to eight games with a two-run single.

After the Nationals pulled within 3-2 in the sixth, Dansby Swanson walked to open the seventh and Riley followed with his first homer of the game to make it 5-2.

Braves: Albies had surgery to stabilize the fracture in his left foot. ... Manager Brian Snitker said RHP Collin McHugh, placed on the COVID-19 injured list on June 7, will rejoin the team this weekend in Chicago.

Nationals: RF Juan Soto missed his second game after banging his right knee against the dugout bench Monday night. ... SS Alcides Escobar (right hamstring strain) went 1 for 3 with a homer in his first rehab game with Triple-A Rochester on Wednesday.

Nationals: LHP Patrick Corbin (3-8, 6.65 ERA) opposes visiting Philadelphia on Thursday. Corbin, seeking his third straight win, is 3-3 with a 4.05 ERA in 10 starts versus the Phillies since joining Washington in 2019.