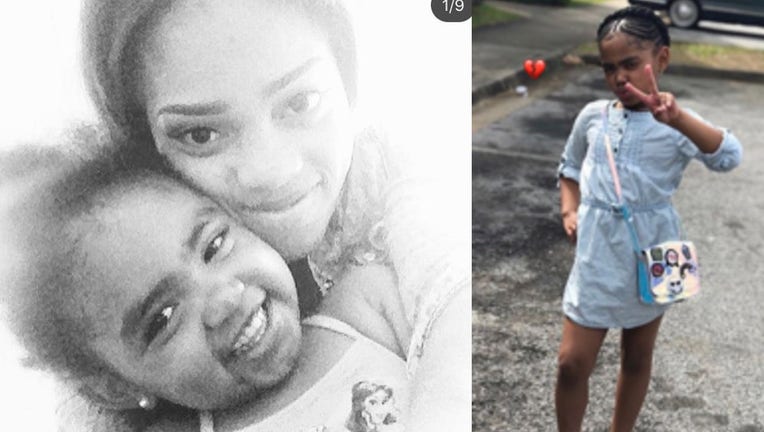 Secoriea Turner was shot and killed on the 4th of July in Atlanta. (Atlanta Police Department)

ATLANTA - The reward is now up to $50,000 for information leading to the person or persons who shot and killed an 8-year-old girl near the southwest Atlanta Wendy's where Rayshard Brooks was shot by police.

"This is about one of our innocent children being shot and killed. All of Atlanta should be outraged. We must solve this case," Attorney Mawuli Davis said during a Monday morning Zoom news conference with Secoriea Turner's parents and community activists.

Turner was riding in a Jeep Cherokee with her mother and another adult on Saturday night when they encountered “a makeshift roadblock that was manned by numerous armed individuals,” Atlanta police Lt. Pete Malecki said. When the driver tried to go around the roadblock, shots were fired and the girl was hit, Malecki told reporters at a news conference.

A man who police named as a person of interest in the death of 8-year-old Secoriea Turner says he was at a protest, he was armed, but he had nothing to do with her death.

"The life of Secoriea Turner matters and we will use the local and national resources of our firm to find the people responsible," affirmed attorney Bill Nelson of the Cochran Firm, founded by famed defense attorney Johnnie Cochran.

Monday afternoon, Attorney Jackie Patterson said he knew who the newest person of interest is and identified him as 18-year-old Julian Conley.

Patterson said Conley had an assault rifle, was on the scene, and even witness the killing, but is not the shooter.

The family of 8-year-old Secoriea Turner renew their calls for justice as the reward leading to the arrest and indictment of the gunman rises to $50,000.

Community members will pass out flyers and go door to door in hopes of getting information Tuesday morning at 11. They will meet at 477 Windsor Street to begin canvassing for information.

Tyler Perry has offered to pay the funeral expenses for the 8-year-old girl, a representative for the actor and filmmaker confirmed last week.