Rep. Marjorie Taylor Greene on her temporary ban from Twitter

Rep. Marjorie Taylor Greene said she was banned from Twitter again for 12 hours for violating the company's policy on COVID-19 misinformation.

ATLANTA - Rep. Marjorie Taylor Greene said she was banned from Twitter again for 12 hours for violating the company's policy on COVID-19 misinformation.

The Georgia congresswoman discussed the issue among other things in a late-night Facebook Live titled: "Free Speech is under attack!!"

"Freedom of Speech is under attack in America like never before and I am experiencing firsthand," Greene told her followers. "Well, tonight I found out that I’m banned once again for 12 hours on Twitter."

Greene said she wouldn’t even be on Twitter if not for the fact that she represents Georgia’s 14th Congressional District.

"But here’s the reality, they have been censoring conservatives for far too long. Our voices are the voices they want to cancel and we are experiencing being cancelled every single day," Greene said.

"The controversial #COVID19 vaccines should not be forced on our military for a virus that is not dangerous for non-obese people and those under 65.

"With 6,000 vax related deaths and many concerning side effects reported, the vax should be a choice not a mandate for everyone."

"This is why no entity should force NON-FDA approved vaccines or masks. Instead help people protect their health by defeating obesity, which will protect them from covid complications & death, and many other health problems. We should invest in health, not human experimentation."

Twitter quickly tagged both tweets as "misleading." The company said their policy about tweeting COVID-19 misinformation is clear and has been online for a while.

"We took enforcement action on the account @mtgreenee for violations of the Twitter Rules, specifically the Covid-19 misleading information policy," the company told the Associated Press. 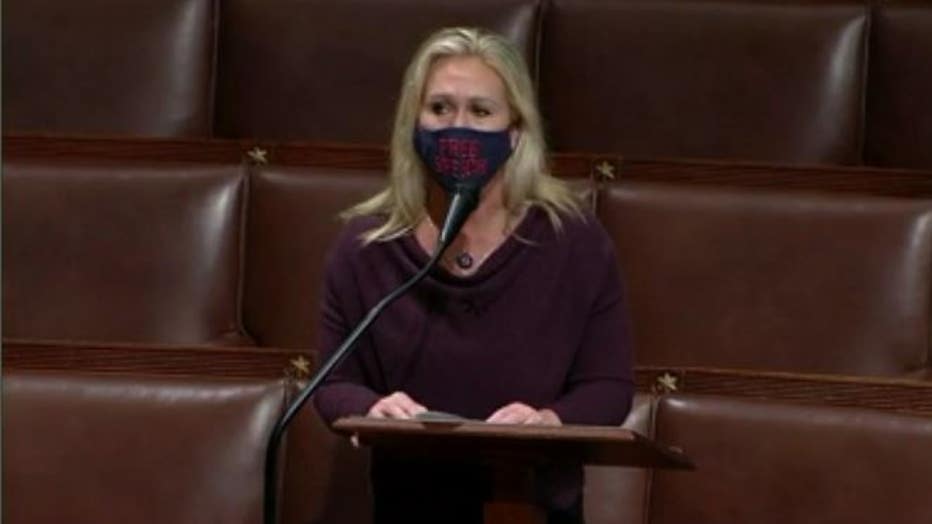 The company said the first strike, no action is taken, but for the second and third strike, the account will be locked for 24 hours. A fourth strike will lock the account for 7-days and 5 or more strikes will lead to a permanent suspension.

"But now we’re in a time where speech is no longer defended. As a matter of fact, only certain type of speech is defended, but other types of speech is cancelled, not only cancelled, silenced," Greene said claiming that conservatives are being targeted.

In January, Twitter temporarily suspended Greene saying that she repeatedly violated rules put in place after the riot at the U.S. Capitol.