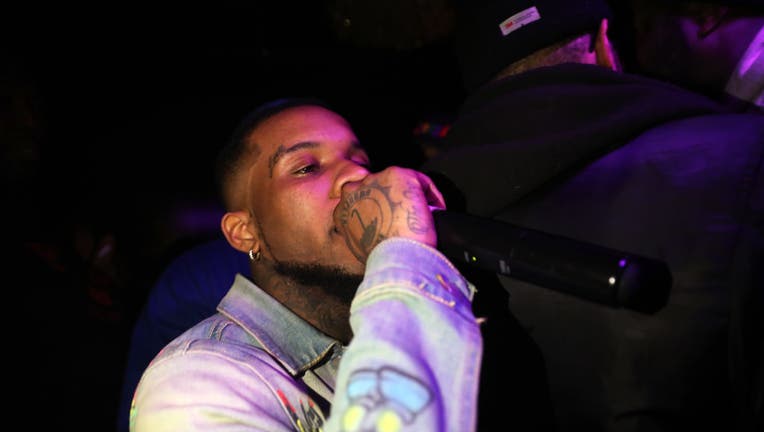 LOS ANGELES - Rap artist Tory Lanez is facing charges of assault after an altercation led to a shooting involving rapper Megan Thee Stallion at a party  in the Hollywood Hills earlier this year.

According to the Los Angeles County District Attorney’s Office, Daystar Peterson, commonly known as Tory Lanez, has been charged with one felony count each of assault with a semiautomatic firearm, personal use of a firearm, and carrying a loaded, unregistered firearm in a vehicle.

Officials also say he faces a gun allegation and that he personally inflicted great bodily injury.

RELATED: Rapper Megan Thee Stallion says she was injured during shooting in Hollywood

Lanez was arrested in July during a shots fired investigation at a party in the 1800 block of Nicholas Canyon Road in the Hollywood Hills West area, according to the LAPD.

Officials say Lanez got into an argument with a woman who has since been identified as Megan Thee Stallion while riding in an SUV.

Following the argument, she exited the vehicle and Lanez apparently shot several times at her feet, wounding her.

If convicted as charged, he faces a possible maximum sentence of 22 years and eight months in state prison.

Megan Thee Stallion, whose real name is Megan Pete, is identified in the felony complaint only as Megan P.

She had declined to name Lanez as the person who shot her in social media posts and videos on the subject for more than a month. But on Aug. 20, she said in an Instagram video that “Yes ... Tory shot me,” and urged him to “stop lying” about the incident.

Lanez has not spoken publicly about the incident. On Sept. 24, he said on his social media accounts that he would break his silence that evening, but that announcement turned out to be a teaser for the release of his fifth studio album, “Daystar.”