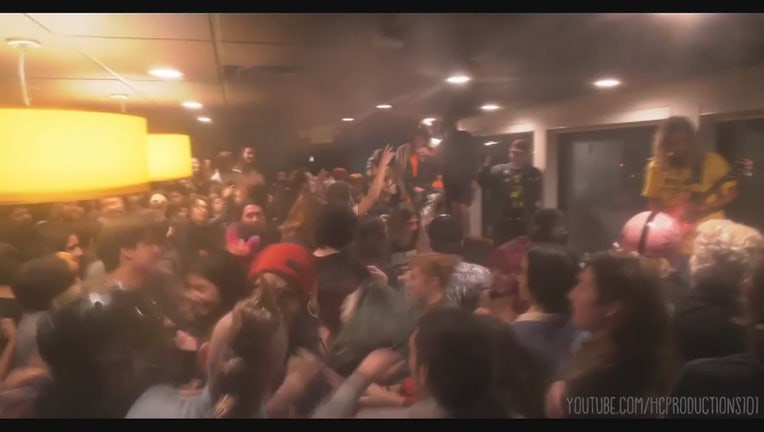 LONG BEACH, Calif. - A Denny’s restaurant in Santa Ana found itself the unwitting host of a hardcore punk show.

It could have been a good night of business... until the moshing started.

A Denny's restaurant in Santa Ana found itself the unwitting host of a hardcore punk show.It could have been a profitable night. That is... Until the moshing started.

The Long Beach based punk band “Wacko” plays at plenty of clubs but last Saturday the venue was a Denny’s banquet room in Santa Ana.

The band promoted the show on social media and claims fans came from out of state to see them preform. But two hours before the 7 p.m. show the restaurant was flooded with fans, dozens were forced to stay outside the restaurant.

Wacko is a hard thrashing punk band and it wasn’t long after the first song started that the crowd turned the banquet room into a mosh pit, including body surfing across the small room, which makes up, a fraction of the entire restaurant.

The band claims they never talked to Denny’s about the show. But 17-year-old Bryson Delvalle who organized the event told FOX 11 the restaurant knew there’d be a show when he reserved the room for Saturday, Dec. 14th. But Denny’s manager said she expected music for a Christmas party, not a full on punk show.

Denny’s released this statement that reads in part “Denny’s is a family friendly restaurant and while we do have banquet space available at some restaurants, we do not allow events that can disrupt the dining experience of our guests.”

Wacko band members say they weren’t paid for the show.

The energetic dancing ultimately left the restaurant with damages to the furniture and light fixtures and the young show organizer was left with an $1800 bill.

Wacko put out an appeal to their fans to send Bryson money in order to help pay for damages. At last count, he still needs $400. Meantime, he’s not dissuaded, he’ll produce other shows when he can.