President Trump rallied for Sens. David Perdue and Kelly Loeffler in Valdosta, Georgia ahead of the runoff election in January.

VALDOSTA, Ga. - All eyes are on Georgia amid a series of high-profile visits, as both Democrats and Republicans call in heavy-hitters to get voters energized ahead of the Jan. 5 runoffs.

The president's rally started shortly after at 7 p.m. at the Valdosta Regional Airport.

Sens. David Perdue and Kelly Loeffler were by the president's side, even as tensions among other Republican leaders continued over Georgia’s elections processes. 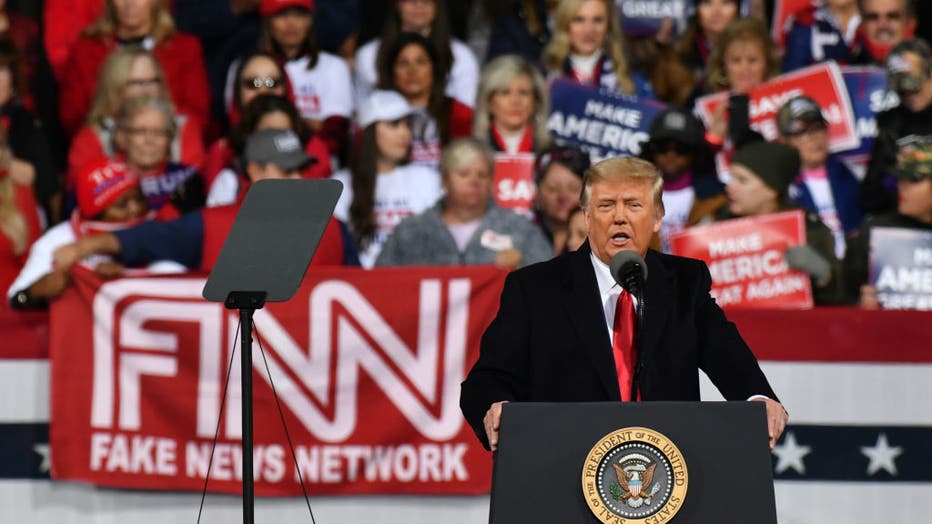 Trump continued to push his so-far unpropagated claims of election fraud, prompting some Republicans to discourage Georgians from casting their ballots in the runoffs.

"You will decide whether your children will grow in a socialist country or a free country. Socialist is just the beginning for these people. They want to go further than socialism. They want to go into a communistic form of government," Trump said at the rally.

Trump has said repeatedly that he believes that he really won Georgia, and has repeatedly attacked Republican leaders of that state, including Gov. Brian Kemp and Secretary of State Brad Raffensperger.

"They are going to try to rig this election, too," Trump said at the rally. "We continue to fight. We've had some great moments. We just need somebody with courage. And we'll be going up to the Supreme Court very shortly," Trump said to cheers from the crowd. "I got more votes than any sitting president in history."

But in an action-packed Friday, Trump's right-hand man said otherwise at a rally boosting support for Perdue and Loeffler -- both neck-in-neck with their Democratic challengers.

"I know we've all got our doubts about the last election,” Pence acknowledged. “And I actually hear some people sayin' 'just don't vote.' My fellow Americans, if you don't vote, they win."

Both parties brought out the big guns this week with the control of the U.S. Senate at stake.

"The special election in Georgia is going to determine ultimately the course of the Biden presidency and whether Joe Biden and Kamala Harris can deliver legislatively all commitments they've made,” Obama said.

Loeffler and Warnock will face off in a debate Sunday evening, moderated by FOX 5’s Russ Spencer.

Ossoff will be answering questions solo since Perdue declined to participate.