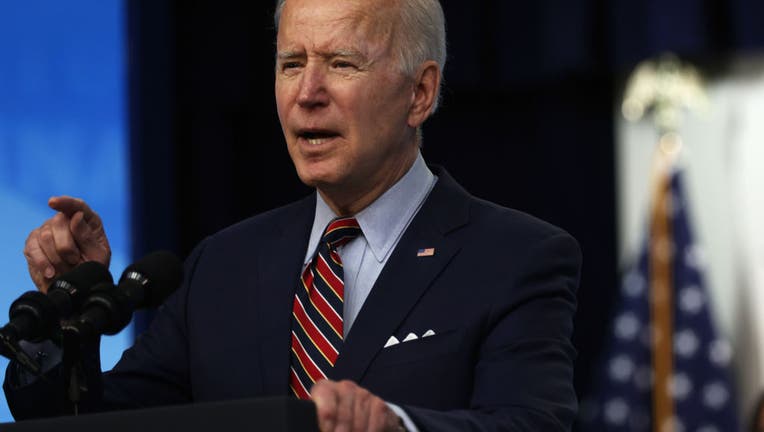 President Joe Biden delivers remarks on the COVID-19 response and the state of vaccinations at the South Court Auditorium of Eisenhower Executive Office Building on April 21, 2021 (Photo by Alex Wong/Getty Images)

ATLANTA - President Joe Biden and first lady Jill Biden will be on their way to Atlanta next week.

The White House press has confirmed that the president and first lady will travel to Atlanta next Thursday as part of a visit tied with his first 100 days in office.

According to the Democratic National Committee, both Bidens will take part in a drive-in a "Back on Track" rally.

Officials have not released details about where the rally will be or what he is expected to highlight on his trip.

Biden had previously been in Georgia in March with Vice President Kamala Harris. The trip was originally planned to rally support for the administration's $1.9 trillion COVID-19 relief bill. However, their plans changed after the shocking shootings at three metro Atlanta spas.

Instead of the original rally scheduled, Biden and Harris met with Asian-American Georgia legislators and community leaders at Emory University

Instead of a political rally celebrating the $1.9 trillion bill, Biden and Harris met with Asian American state legislators and other community leaders at Emory University to talk about racist rhetoric and actions against Asian Americans and Pacific Islanders.

In Atlanta, Biden called on Congress to "swiftly pass the COVID-19 Hate Crimes Act." Thursday, the bill nearly unanimously passed in the Senate. Sen. Josh Hawley, R-Mo., was the only no vote.

The president and the vice president also visited the Centers for Disease Control and Prevention's main campus to discuss the distribution of the multiple COVID-19 vaccines.

In the Biden administration's first 100 days in office, the United States passed a milestone of more than 200 million shots administered across the country.