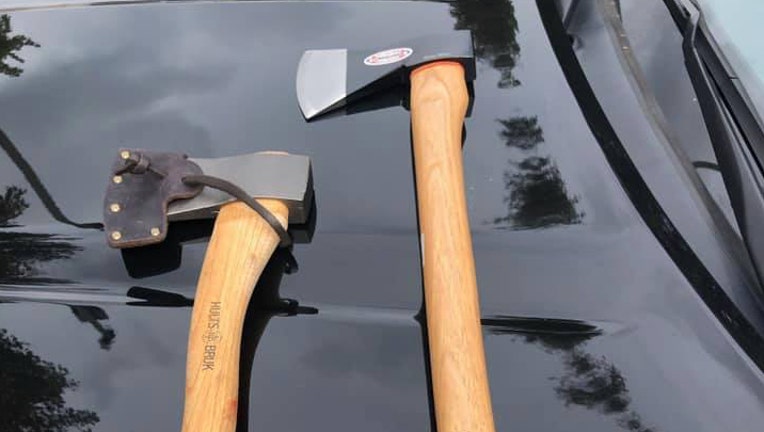 Marietta police said officers arrested a person accused of shoplifting a hatchet and an ax from a Cobb County store and wielding them threateningly on Saturday. (Marietta Police Department)

MARIETTA, Ga. - Marietta police said officers arrested a person accused of shoplifting a hatchet and an ax from a Cobb County store and wielding them threateningly on Saturday.

Police shared an image of the two weapons, which officers confiscated.

Police said the suspect tried to ignore officers when they confronted him. Police said he changed his grip and held both handles as if he was "going to use them to attack."

Police said the suspect walked near a car dealership and was getting close to people that were shopping there.

Police said the suspect did not comply with police commands to drop the axes, and officers fired "multiple less-lethal beanbag shotgun rounds" until the suspect dropped both the hatchet and the ax.

Police said the man was arrested without incident and treated for injuries from the beanbag rounds.

The suspect is facing numerous charges including shoplifting, obstruction, reckless conduct and pedestrian in the roadway.

"THANKFULLY this was able to be handled without anyone getting seriously injured!" the Marietta Police Department wrote on Facebook. "We are fortunate our city and police department have invested in both the less-lethal tools as well as training to handle complex situations like this!"