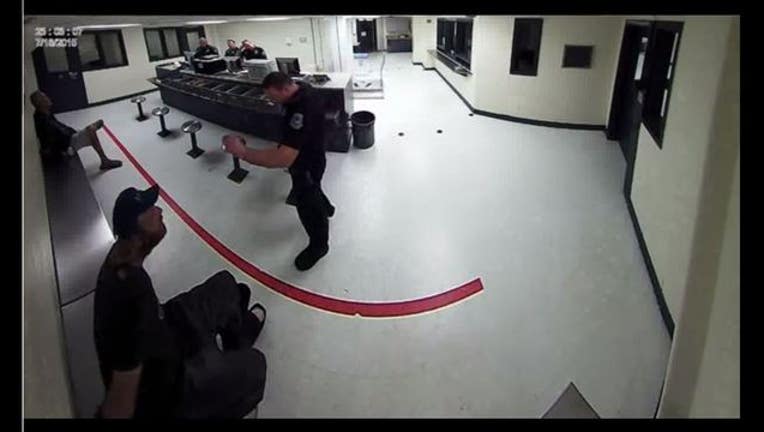 A Florida police officer is under investigation after being caught on video throwing peanuts at a homeless man. The man, identified as Randy Miller, is seen in the video sitting handcuffed on a bench waiting to be booked into the county jail.

At about the three minute mark, Officer Andrew Halpin is seen throwing peanuts into Millers mouth. After several misses Halpin cheers when one peanut successfully makes its target of Millers mouth. Then another officer hands Halpin more peanuts that he then throws and Miller. Shortly there after, Miller drops to the floor to pick the fallen nuts up with his mouth while still handcuffed.

Halpin is then seen attempting to help Miller from the floor at about the 5:30 mark, but walks away before coming back and kicking the peanuts toward Miller. At just after the seven minute mark, Halpin is seen helping Miller to the bench. Halpin then walks back to the desk before two officers emerge from another room to search Miller, remove the handcuffs and complete processing him into the jail.

Police Chief Bernadette DiPino said in a statement “I’m disappointed in what I saw in this video. Due to the actions I’ve seen on camera, I immediately initiated an internal affairs investigation.”

Halpin is currently on administrative leave. He has been with the department since November of 2006. Miller is still in jail. He has been there since July 18, unable to make bond.