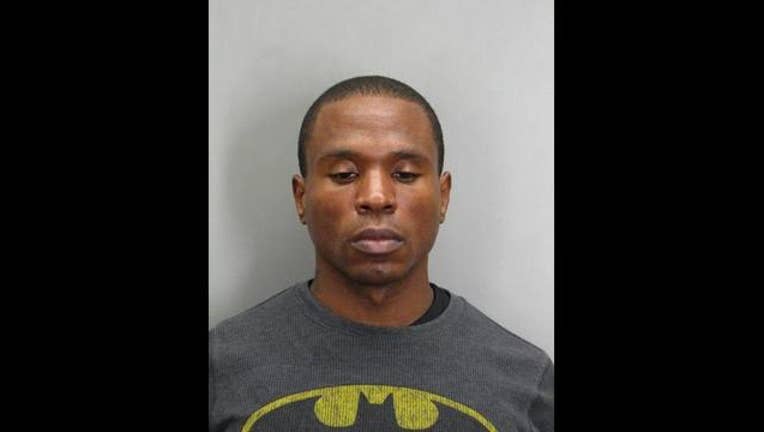 Now, Edwards is allegedly back to it again -- this time in Virginia.

“He was issued bond,” said Officer Brendan Murphy, a spokesperson for the Fairfax County Police Department. “He was arrested and brought to the adult detention center and is out now.”

In August, Edwards was arrested for allegedly taking upskirt photos of a woman in a Reston Safeway store, then following her and exposing himself.

He was arrested again in early September for allegedly taking upskirt photos of another woman at a different Safeway store.

Three days after that, he allegedly went back to his old ways.

According to an affidavit exclusively obtained by FOX 5, a Virginia woman was squirted with bodily fluid, but not from a bottle this time.

On September 8, a woman got off the bus at a commuter lot at Lee Highway and Stone Road in Centreville, which is just a few blocks from Edwards’s home. According to police, she was walking along the sidewalk when she suddenly felt something on her back. When she turned around, she saw a man touching his genitals. He ran away, but then she started to feel something wet through her clothing and that is when she called the police.

After the attack, police saw Edwards on surveillance video across the street at a gas station. In an interview with police, Edwards said he was home at the time doing bible study with his mother on the phone.

The court documents say police found seminal fluid on the victim's clothing. She described her attacker as a man with long hair, a bandana and a t-shirt with a circular logo. Police believe this was a disguise.

Superman? There is a superhero pattern with Edwards.

When you look at his mugshot in August, he was wearing a Batman t-shirt.

Despite pleading guilty in Maryland, he denied those charges.

“Legally, I have not,” Edwards said. “There is no conviction of me in Maryland.”

And he said he didn't do the Safeway attacks.

“Obviously I’m denying all of it,” he said. “Obviously I feel that it’s just an attack.”

“I can't comment if Mr. Edwards is a suspect in another case,” said Officer Murphy. “But detectives are investigating as many leads as possible to see if he was possibly involved in any other events in Fairfax County.”

Edwards’ lawyer, Lavonda Graham-Williams, gave us this statement, "Michael Edwards is presumed innocent and intends to vigorously defend against these allegations."

We went to Edwards’s condominium in Centreville on Friday and again on Monday to ask him to tell his side of the events. We could hear the music turned up and down, but he didn’t answer. There were crosses written across the door that we didn’t see in the August interview.

I think everyone is asking the same question -- after two arrests since August, and now suspect in an even more disgusting crime, why isn't this man in jail?

I spoke to Virginia's deputy commonwealth attorney, Bob McLean, and he explained that a magistrate set bond for Edwards for both of the Safeway attacks.

Edwards goes to court in Virginia on October 13. Until then, police say women should report any suspicious activity and let them investigate.