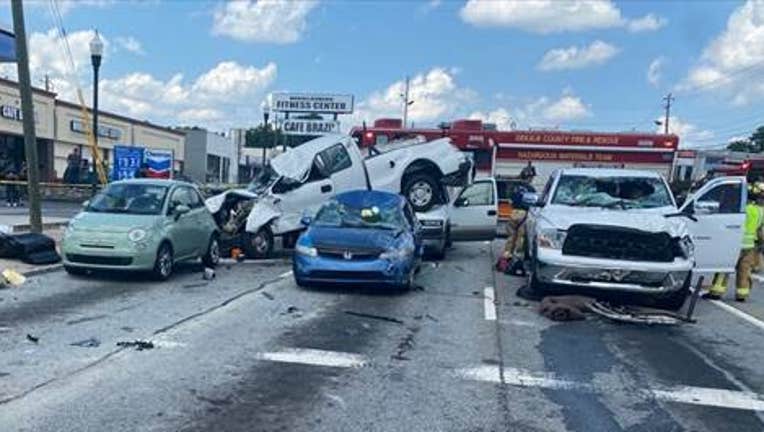 Officers were called to the 2700 block of Shallowford Road around 2:45 Sunday after a victim said his car had been stolen with his young son in the backseat.

The victim told police that he had left his 2007 Ford F150 running with his son inside when he went inside the store. While he was in the store, officials say the suspect got into the driver's seat and backed up the vehicle, hitting an unoccupied vehicle in the parking lot.

After the first collision, the young boy was let out of the car. Police say the child had suffered injuries in the collision and was taken to Egleston Children's Hospital in Atlanta.

Once the boy was let out, officials say the suspect fled the parking lot at high speeds. The speeding ended with a multi-vehicle wreck at the intersection of Buford Highway and Chamblee Tucker. Another driver, described as an 80-year-old woman, was killed instantaneously in the crash.

The offender attempted to walk away from the accident but was quickly arrested by police officers.

Police have not yet released the name of the suspect, but say he has been charged with multiple felonies and other traffic charges.

Two adults were also taken to nearby hospitals for treatment.

Authorities closed parts of Buford Highway and Chamblee Tucker Road during the investigation.

The Georgia State Patrol is assisting in the investigation.